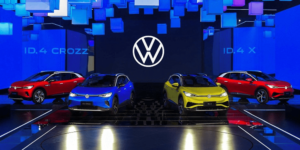 The Volkswagen Group is fundamentally realigning its organisation in China. A new “China Board” headed by Ralf Brandstätter is to make key decisions in the region across brands and in exchange with the joint venture companies.

Brandstätter’s move to China has already been known since December 2021. Since the top manager is supposed to get the recently weakening business in China under control, a major restructuring beyond Brandstätter’s personnel was expected in industry circles. Now it is clear how the organisational structure will be changed.

With effect from 1 August, the ‘China Board’ is to manage VW activities in the region across all brands. In addition to Brandstätter, who will chair the China Board, the regional CEOs of Audi, CARIAD and Volkswagen Passenger Cars will be represented, as well as representatives of important specialist departments.

“This will give the region greater autonomy to further strengthen its leading position in the dynamic automotive market,” VW wrote in the statement. It added that the new structure would enable faster decision-making, optimal cooperation between the Group brands and close involvement of the joint venture companies in a spirit of partnership.

The reorganisation also affects the local development departments: according to the group, it will bundle the technical resources and competencies of its brands more strongly “in order to accelerate its own development speed of innovative technologies and digital services in China”. In order to be able to tailor products and services more closely to the needs of Chinese customers, the local development scope will be increased and more developers will be hired. VW China will thus gain more autonomy from Wolfsburg.

In this context, the company has appointed Marcus Hafkemeyer, currently Executive Strategy Advisor at Huawei Automotive in Shanghai, as Chief Technology Officer of Volkswagen Group China, effective from 1 August. The company is also making a new appointment to another key position in the region: Stefan Mecha, currently CEO of Volkswagen Group Rus, will become the new CEO of the Volkswagen Passenger Cars brand and Head of Group Sales in China, effective 1 August.

“The China region is being given significantly greater decision-making powers and autonomy,” says Brandstätter, who himself will take over the management of Volkswagen Group China and responsibility for the Chinese market on the Group Board of Management on 1 August. “We are therefore tailoring our services, technologies and products even faster and more consistently to the specific needs of our local customers.”

Ferrari aims for 60 per cent electrification by 2026