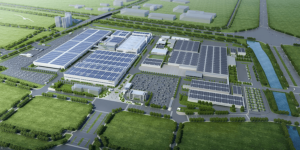 As leaked last year, the plant will have an annual capacity for 120,000 electric cars and is scheduled to start production in 2024. However, the start of construction in June is later than planned: China Automobil News had reported in August 2021 that construction was to start in October.

The investment sum is also likely to be somewhat higher than expected: Honda now confirms that the plan provides for investments of 3.49 billion yuan (about 490 million euros). Previously, there was talk of 2.99 billion yuan.

The carmaker does not specify which models GAC Honda will build in the new plant – but it will only be electric cars. Honda, through its joint ventures with GAC and Dongfeng, plans to bring ten e-models to market by 2027. With the new plant, GAC Honda will have a production capacity of 890,000 vehicles in 2024; together with the 840,000 units of Dongfeng Honda, the Japanese manufacturer will have a total of 1.73 million vehicles in China. This sum already includes the pure electric car plant that Honda announced together with joint venture partner Dongfeng at the beginning of this year. It should also be possible to build up to 120,000 electric cars per year in Wuhan from 2024.

In addition to starting construction of the Guangzhou plant, GAC Honda has also launched sales of the e:NP1 electric SUV in China, following the launch of Dongfeng Honda’s e:NS1 in April. The e:NP1 is priced from 175,000 yuan (24,715 euros), for which the base model is available with a 420-kilometre range according to the Chinese CLTC method. The model with a range of 510 kilometres is listed at a minimum of 205,000 yuan (28,950 euros) – both battery versions come with higher-quality equipment.

According to earlier information, the e:NP1 and e:NS1 duo is still based on the combustion engine HR-V model. Honda itself speaks of an all-electric vehicle architecture “e:N Architecture F” – which is not out of the question, as it could be a purely electric further development of the HR-V’s platform. The other e:N models announced by Honda in China are then to use an architecture “developed exclusively for electric vehicles”. The e:N models are not to come to Europe.

VW to present Chinese version of the ID. Aero in June