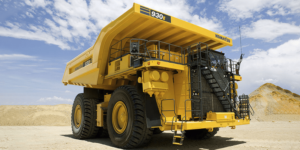 The US motor manufacturer Cummins and the Japanese construction equipment manufacturer Komatsu have agreed on a development partnership for zero-emission trucks for use in mining operations. The initial focus will be on hydrogen fuel cell solutions for large mining trucks, among other things.

Komatsu and several of its customers from the mining industry founded the Komatsu Greenhouse Gas Alliance last year to promote electrification in this sector through joint development work. The first concrete goal of the alliance is to further develop an existing Komatsu concept. This is a study of a transport vehicle that will be able to run on a variety of energy sources in the future, including a diesel-electric hybrid drive, overhead line, battery drive and hydrogen fuel cell drive.

“The collaboration with Cummins complements Komatsu’s development of the power-independent truck,” the US engine maker’s statement now reads. Key data on the vehicle’s fuel cell system is not given in the release, which is published with the same wording by both companies.

“Komatsu’s extensive mining and equipment design and integration expertise coupled with our advanced energy technologies, including hydrogen fuel cells, will accelerate the decarbonisation of mining equipment,” said Amy Davis, vice president at Cummins. “The mining industry has great potential to lead the adoption of renewable solutions.”

This is not the first collaboration for the two companies; numerous mining and construction machines from the Japanese company already use diesel engines from Cummins. “Cummins has been a long-time partner of Komatsu and has invested in the key technologies needed to support the energy transition in mining,” said Masayuki Moriyama, president of Komatsu’s Mining Business Division. “These are critical technologies to help mining customers reduce CO2 emissions and accelerate carbon neutrality.

Mining operatios have recently seen greater interest in and uptake of vehicles with zero tailpipe emmission.  The lack of emissions is of course advantageous for underground conditions, but hydrogen fuel cell solutions also offer special advantages. According to the experiences of Fortescue Metals as communicated at this year’s Reuters hydrogen conference, hydrogen fuel cell vehicles have the advantage that the hydrogen infrastructure can be built according to known loads and distances for immediate uptake in mining 0perations, while the hydrogen systems work well in remote situations where grid power is not available. In addition, hydrogen fuel cells provide a greater density of power for extra-large vehicles and can be refuelled in minutes, which benefits vehicles that companies like to keep in constant operation.

Cummins has been busy with hydrogen fuel cell vehicles for some time. The US truck-maker is currently building a plant for fuel cell systems here in Germany.