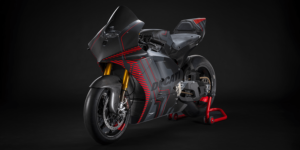 The motorbike manufacturer Ducati, which belongs to Audi, has presented the V21L, the prototype of the electric racing motorbike for the MotoE. In this context, the Italians have also published the first technical details of the machine.

As reported, Ducati will be the sole manufacturer of electric motorbikes for the MotoE from 2023 to 2026 as the successor to Energica. The Ducati MotoE has a total weight of 225 kilograms and is expected to deliver up to 110 kW of power, 140 Nm of torque and a top speed of 275 km/h.

Ducati’s declared goal is to achieve lap times that are between the level of the combustion engine racing series Moto3 and Moto2. Energica’s previous MotoE bikes are generally slower than the smallest internal combustion class, Moto3. Among other things, the lower weight should contribute to the increased lap time: the Energica bike weighs in at over 160 kilograms.

Improved, but still the heaviest component is the battery. In the electric Ducati, the battery pack weighs 110 kilograms and offers a capacity of 18 kWh. Inside are 1,152 cylindrical cells of the 21700 format. The battery with its carbon fibre housing is used as a supporting body part – similar to the petrol engine on the Ducati Panigale V4.

During development, the Ducati engineers worked closely with the parent company Audi. The Ingolstadt-based company is known to have developed several generations of Formula E drives up until its factory withdrawal. For example, Ducati mentions that the inverter weighs only five kilograms – and is “derived from a high-performance model from racing for electric vehicles”.

The 110 kW electric motor is developed by a supplier for the Ducati motorbike. It weighs 21 kilograms and has a maximum speed of 18,000 revolutions per minute. Battery and electric drive system work with 800 volts system voltage.

The electric Ducati is charged with up to 20 kW via a connection integrated into the rear. At this point, Ducati emphasises that one of the “most advanced technical solutions” on the bike concerns the cooling system. Full-throttle use on the racetrack is an enormous thermal load for the battery. The current Energica MotoE bike, therefore, had to cool down a bit in the pits before it could be charged. Ducati has developed a “particularly sophisticated and efficient dual-circuit fluid system”. This should allow the bike to be charged immediately after returning to the pit lane – the charging time is 45 minutes to 80 per cent.

As is usual in racing, Ducati also uses a lot of carbon fibre, for example in the rear subframe. The front frame and swingarm are made of aluminium. For the suspension, standard elements from Öhlins are used, but the brakes were specially designed by Brembo to meet the requirements of the MotoE Ducati.

“A few weeks ago I had the extraordinary opportunity to ride the Ducati MotoE on the track and I immediately realized that I was living in a historic moment,” says Ducati boss Claudio Domenicali. “The world is going through a complex period and environmental sustainability is an element that all individuals and all companies must consider a priority if we want to preserve the delicate balance of the planet. As Ducati, we have grasped this need and we went in search of a challenge that would allow us to contribute to the common goal of reducing CO₂ emissions and at the same time to keep faith with our DNA linked to racing.”