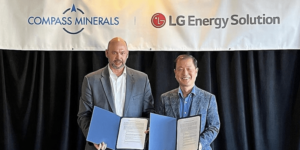 South Korean battery manufacturer LG Energy Solution has signed its first offtake agreement with a US-based lithium supplier. The agreement with Compass Minerals, which is still non-binding, provides for LGES to be supplied with lithium carbonate and lithium hydroxide from 2025.

According to LG’s announcement, the South Korean company has secured up to 40 per cent of Compass’ planned lithium carbonate and lithium hydroxide production over a seven-year period. Both companies now want to work towards a binding supply contract. It is not clear from the memorandum of understanding by when this should be in place.

Local procurement of lithium makes perfect sense for LGES: In March, the company announced three important projects in North America. On the one hand, LGES is building a 45 GWh battery factory in Canada together with Stellantis, on the other hand, an 11 GWh plant for the production of round cells is being built in Arizona. In addition, the South Korean company is expanding their existing plant in the US state of Michigan.