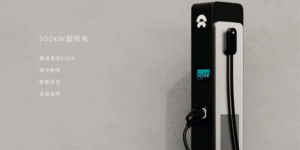 At its second Power Day, the Chinese electric car manufacturer Nio has announced that it will start installing a new 500 kW fast charging station in China and Europe this year. The company is also revealing more about its third generation battery swapping station.

At Nio’s second-ever Power Day, the company revealed the latest information on its own charging and battery swap networks, but the biggest surprise was certainly the presentation of the new High Power Charger.

With 500 kW and a current of up to 650 amps, Nio is now going one better. At the Power Day, the company did not disclose where the first new fast chargers would be installed – only that these would start being installed by the end of this year. The network may potentially be huge, since Nio joined forces with energy giant Shell towards the end of last year. This partnership is specifically focussed on a strategic partnership to collaborate on charging and battery swap facilities in both China and Europe.

After the launch of its second-generation battery swapping station last year, Nio has now allowed a first preview of the third generation of the technology at Power Day. This will offer even greater capacity and a more flexible layout. Nio’s third-generation battery swap station is currently nearing the end of development and is still being tested.

Nio has said that in China by 2025, it will have a battery swap network covering nine vertical highways, nine horizontal highways, and 19 urban areas. The promise here is that by 2025, more than 90 per cent of Nio customers will have at least one battery swap station within 3 km of their homes. Most of these battery swap stations will be in China. Of the 4,000 battery swap stations NIO plans to have installed worldwide by 2025, 1,000 of these will be outside China – presumably, since Nio is now selling electric cars in Europe, most of these will be focussed here. Already four battery swapping stations were to be set up in the Oslo area last year, with further stations planned for Bergen, Stavanger, Trondheim and Kristiansand in this year. Nio has said it will build 20 battery exchange stations in Norway by the end of 2022.

Nio said at its most recent Power Day, that it is testing the use of stored batteries to provide power back to the grid below a given battery swapping station. In preparation, the Chinese automaker has already completed vehicle-to-grid (V2G) testing and says it will implement this technology into its applications  in the future. Nio says it will reveal more details about its battery swapping stations towards the end of this year or early next year.

For its planned network of battery swap stations in Europe, Nio will open a factory in Hungary. Charging columns will also be manufactured there to meet demand in Europe, as with the battery swapping stations. In July 2021, Nio received the TÜV certifications to be able to sell and operate its battery exchange stations and chargers in all EU member states.

Nio is generally taking a fairly holistic view of electric cars, focussing not only on its own infrastructure, but also supply chains. Earlier this month, Nio announced plans to start producing its own developed battery packs in 2024. The 800-volt battery packs are to be used in models of the new brand for more affordable electric cars announced last year. In the long term, the company also plans to manufacture its own cells.

EVCS raises capital for more chargers on US West Coast