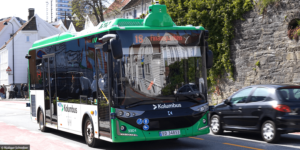 The Turkish bus manufacturer Karsan and the transport authority Kolumbus in Norway have reached the next level in highly automated driving in public transport. An e-Atak bus is running in regular service with Level 4 autonomy on public roads in the Norwegian city of Stavanger.

Karsan Executive Board Member Okan Baş, Kolumbus CEO Edith Kristin Nøkling, and Jon-Ivar Nygård, the Norwegian Minister of Transport, attended the launch of the autonomous bus service. All three were clear that this European premiere was a special occasion: Baş explained that the highly automated e-Atak is a series product, not an experimental vehicle. And Nøkling made it clear that the future is already being experienced at Kolumbus, while Nygård noted that this is a decisive step forward in the operation of autonomous vehicles.

The Minister of Transport’s delight at the European premiere is evident, as the commissioning of a Level 4 electric bus fits well with an electrified country. While the transition to electric cars is slowly gaining pace in the rest of Europe, Norway has long since been in full swing. In the whole of last year, the market share of purely electric cars was already almost 65 per cent. Most of Norway’s electricity comes from hydropower, and green electricity is cheaper than fossil fuels like petrol and diesel. But Norwegians wanting to drive electric cars have had few hurdles since charging infrastructure is available all over the country– and not only in the big cities.

Among other countries, Germany would have liked to have been the world’s pioneer in autonomous driving. After the Federal Ministry of Justice rejected a draft law on autonomous driving at Level 4 by former Federal Transport Minister Andreas Scheuer in January 2021, his successor Volker Wissing introduced a new legal ordinance in February 2022.

Norway is taking it a step further, where a Level 4 autonomous electric bus is officially in regular operation on the public transport line in Stavanger. The e-Atak autonomous bus from Karsan travels a 2.5-kilometre route through the heart of the city. Not on a closed-off road, but on a public one that even has a bicycle lane.

Two years ago, Kolumbus, the authority responsible for planning, marketing and organising public transport in Rogaland, decided to rely on highly automated electric buses. “Then, in a joint effort, the goal was to implement this in the short term,” says Edith Kristin Nøkling. During the worldwide search for an appropriate vehicle, she says, attention was drawn to the Turkish bus manufacturer Karsan, not only from the technical point of view but also because the size and range of the vehicle fitted well with Kolumbus’ ideas.

The eight-metre-long e-Atak can carry a maximum of 52 passengers. At present, however, passengers are only permitted to sit and not stand in the vehicle, which reduces its capacity to 21 passengers; the Norwegian company also has the welfare of the passengers in mind when using new technologies. The advantages of this primary focus were shown during the vehicle’s premiere trip when several cruise ships were in the harbour of Stavanger at the same time, and countless tourists not only lined the pavements but also repeatedly stepped more or less unintentionally onto the road.

The artificial intelligence recognises the passers-by who suddenly step onto the road, causing the highly automated electric bus to halt immediately, however, sometimes a little abruptly, so standing passengers would be at a disadvantage here. Otherwise, the midi electric bus proved that those involved had done their homework. This is partly thanks to the Turkish software company Adastec, which provides the platform “Flowride.ai Level-4” for the buses’ autonomous functions.

Whether roundabouts, starting uphill including cornering or the usual tasks such as stopping and leaving stops, the e-Atak mastered crossing intersections independently and reliably. The vehicle even moves confidently next to cyclists or other cars.

For this purpose, artificial intelligence uses LiDAR sensors, which are located at various points on the vehicle, or thermal imaging cameras. Adastec has developed modular software for automated driving and supplemented it with a back-office platform.

While the various cameras and sensors are visible on the vehicle, the artificial intelligence is barely visible: Behind two seats in the back seat is a grey box that houses the hardware, the four processing units powered by NVIDIA GPUs. The system is integrated into the entire electronic infrastructure of the bus and receives nearly 100 different sensor readings. Depending on the deployment requirements, Karsan and Adestec provide the operator with appropriate remote control and V2X options. Bus ITS systems such as screens or passenger counting have also been integrated to further perfect Level 4 automation with even more data.

At the commissioning in Norway, Karsan’s executive board member Baş made it clear that the highly automated Level 4 e-Atak in Stavanger was not a one-off. Other vehicles are already about to be delivered, and Karsan is building them in a small series. He also believes that Germany, for example, is a market that can be served. Politicians would only have to create the appropriate framework.

In Germany, the legislative body of the Bundesrat has prepared the appropriate legal framework for vehicles with autonomous driving functions that can soon be approved for so-called regular operation on specially designated routes. “The fact that autonomous vehicles will be able to participate in normal road traffic in our country in the future is unique in the world and was an enormous feat. But it is precisely this detailed experience in developing the legal framework and its implementation that we can make a significant contribution to further work at the international level,” said German Transport Minister Volker Wissing.

Highly automated buses of different sizes will help determine future mobility. And they will also make rural areas that are currently almost completely cut off from public transport more accessible. But that is not the only place where they will show their advantages. In the USA, Waymo is allowing the first robot cars drive as taxis in Phoenix – sometimes without a safety driver behind the wheel. Passengers can order their ride via an app and are picked up wherever they happen to be. Even if this only takes place in the suburbs of Phoenix, for the time being, local reports say that expanding the offer is not a problem.

Karsan has also recognised the market’s potential in the USA: Another highly automated e-Atak has already been delivered to Michigan State University in the US. It runs on campus as a full-time shuttle service and is used to transport students, staff and lecturers at the university.