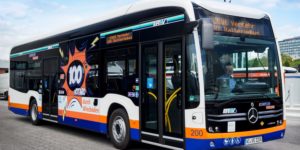 ESWE Verkehrsgesellschaft in Wiesbaden has taken delivery of its 100th Mercedes-Benz eCitaro electric bus. The delivery from Daimler Buses is part of an order of 56 units placed three years ago, the order volume of which has since increased to 120 electric buses.

ESWE ordered not only buses but, as reported, an overall package that includes the replanning and conversion of the depot, equipping with charging columns, the construction of the transformer station to convert the electricity from medium to low voltage and the laying of cables on the site.

In cooperation with the Daimler Buses partner company IVU Traffic Technologies, a charging management system will also be supplied from Berlin. “Three years ago it still represented a pioneering achievement. Now the flagship project has matured and been implemented by Daimler Buses in various forms with other companies,” the manufacturer writes in a statement.

“It is a special pleasure for me to be able to hand over the key to the 100th eCitaro to ESWE Verkehrsgesellschaft today,” says Rüdiger Kappel, Head of Sales, Public Transport Germany at Daimler Buses. “ESWE Verkehr is a long-standing customer with whom we have raised our partnership as a bus manufacturer to a new level.”

The vehicle now delivered is an eCitaro as a two-door solo bus, which is equipped with a WLAN router, USB sockets and the Brake Assist and Sideguard Assist assistance systems, among other features. Solid-state batteries with a total capacity of 441 kWh are also installed. In Wiesbaden, certified and sustainable green electricity is used as a matter of principle, the statement continues.

The Wiesbaden-based mobility service provider ESWE Verkehr operates local public transport in Hesse’s capital with more than 290 buses. They operate on 43 routes and carry more than 61 million passengers a year, according to the information. The majority of the company’s fleet consists of Mercedes Benz Citaro buses.