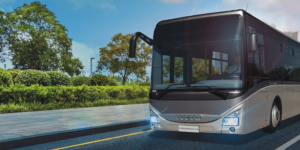 Iveco will use Hyundai fuel cell systems in its future hydrogen buses for Europe. The FC systems will come from HTWO, the standalone Hyundai brand announced at the end of 2020.

The decision to collaborate with the Italian manufacturer in this area extends HTWO’s provision of its technology to other companies. The fuel cell systems are used in Hyundai’s FCEVs.

In March, Hyundai and Iveco had agreed to explore possible cooperation on shared vehicle technology, joint procurement and mutual supply, including electric powertrains and platforms and hydroben fuel cell systems.

“By collaborating with an industry leader like HTWO, built upon Hyundai’s 20-plus years of experience in hydrogen fuel cell technology, we at IVECO BUS can respond rapidly to customer requests for zero-emission vehicles powered by cutting-edge propulsion technology,” said Domenico Nucera, president of the Iveco Group Bus Business Unit. “We have already started submitting public tenders for hydrogen-powered buses and will continue in the coming months; as we go on playing our leading role in the energy transition of Europe’s mass passenger transport segment.”

Licensed use of fuel cell systems is nothing unusual: Portuguese bus manufacturer CaetanoBus has been using Toyota fuel cells in its H2.CityGold model for years. The cooperation has now gone so far that the vehicles are even delivered with Toyota logos.

Solectrac & Nolan to set up electric tractor factory in the USA