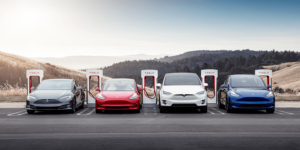 Tesla has changed its investment plan, according to a filing with the US Securities and Exchange Commission (SEC). According to this, Tesla wants to invest between six and eight billion dollars per year until 2024. In addition, the Superchargers in the USA are to be opened to third-party brands.

But first, the investment plan: According to the document filed with the SEC, Tesla expects to invest one billion dollars more than before in this year and the next two years – instead of five to seven billion dollars, six to eight billion dollars have been budgeted. The additional money is to flow into the two new plants in Austin and Grünheide in order to scale production.

Tesla explains the range of two billion dollars with the unclear situation: “Given the number, breadth and depth of our own core projects” it is difficult to predict the capital flows for this. Specifically, new products such as an updated Megapack generation, electric car production on three continents and entry into battery production are mentioned.

As recently as June, Elon Musk had called the two factories “gigantic money-burning furnaces” that are “losing billions of dollars”. Nevertheless, the company once again made a profit in the billions in Q2. The background to the faltering production ramp-up is, for example, the shortage of 4680 batteries for the Giga Texas, the logistics problems in Chinese ports and, at least in Grünheide, probably also the lack of skilled workers.

At one point, Tesla has reportedly eased the supply chain problems for the Giga Texas somewhat: according to the report, the factory in Austin is supplied by several suppliers from Mexico by truck. In order to simplify the transport, Tesla has been given its own lane at the Colombia Solidarity Site border crossing between the Mexican state of Nuevo Léon and Texas, according to Bloomberg. There, trucks with supplier parts, but not Tesla cars, can drive past the rest of the border crossers in their own lane. It is not known what Tesla has done in return.

In addition, according to the Wall Street Journal, Tesla is on the verge of opening up its Supercharger network in the USA to other brands. According to the newspaper, Tesla has applied for federal funding for the further expansion of its HPC network. A prerequisite for funding, however, is that the subsidised charging points are available to all electric cars, including those from competitors. In North America, the hurdle for opening up the Supercharger is still somewhat higher than in Europe: while Tesla relies on the CCS standard here with the V3 Supercharger, the US Superchargers have Tesla’s own charging plug. Electric cars from other brands would therefore have to use an adapter – in January there were reports about such a connector. At the time, it was said that the adapter would be tested as part of a pilot programme from the third quarter of 2022.

US startup Aptera also just wrote a petition to congress to adopt the Tesla Superchargers as the national charging standard in the USA.

Sono Motors presents the final series design of the Sion