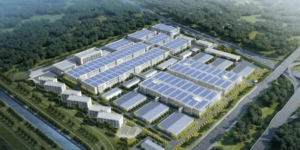 Ganfeng Lithium has begun construction of a solid-state battery production facility, which the company says will be the largest of its kind in China to date. Once completed, the factory in Chongqing will offer annual capacities of 10 GWh each for the production of battery cells as well as battery packs.

Ganfeng is actually the world’s largest lithium processor by market capitalisation. At the factory in the Liangjiang New Area in Chongqing in southwest China, the company plans to build and develop solid-state batteries itself in the future – in addition to the production facilities for cells and packs, a research institute is also planned at the site.

The project in Chongqing is not Ganfeng’s first battery factory: the company already has a battery production facility in Xinyu, Jiangxi province. Since the commissioning of the expansion stage there in January, up to 2 GWh of solid-state batteries per year and up to 7 GWh of LFP battery cells can be produced.

At present, there are only rough indications of the energy density of Ganfeng’s first solid-state battery generation. The first model to use these cells is the Dongfeng E70. According to a publication by the Chinese Ministry of Industry and Information Technology, the battery of the E70 has an energy content of 52.26 kWh and weighs 335 kilograms. This results in an energy density of 157 Wh/kg at the pack level.

It remains to be seen how much higher the energy density is at cell level – at pack level, the weight includes not only the cells but also the entire battery housing, the cooling system, the wiring and, in some cases, the built-in control units. Nevertheless, the 157 Wh/kg do not look outstanding in comparison: A BYD Han EV with BYD’s own Blade battery on the supposedly inferior LFP basis comes to 85.44 kWh and a battery weight of 568 kilograms – that makes 150 Wh/kg at pack level.