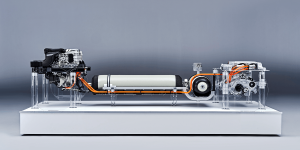 According to a media report, BMW wants to produce fuel cell SUVs in large series from 2025. BMW had previously only confirmed that it intended to offer the iX5 Hydrogen in small series this year.

This is reported by the Japanese business paper Nikkei with reference to BMW sales chief Pieter Nota. According to Nikkei, BMW plans to start mass production and sales of fuel cell SUVs in 2025 in cooperation with its technology partner Toyota. However, further details on this are not yet given.

BMW presented the iX5 Hydrogen at the IAA Mobility in September 2021. Small series production is to start in a few weeks, and the first vehicles are to be delivered before the end of this year. The iX5 Hydrogen uses fuel cells from Toyota, the integration into the vehicle as well as numerous other components around the supplied Toyota fuel cells were developed by BMW itself.

The key technical data have largely been known since 2020: The hydrogen (up to 6 kg) is stored in two 700-bar tanks made of carbon fibre composite material. The Toyota fuel cell in the engine compartment produces 125 kW, but the e-motor in the rear produces 275 kW. If the electric motor requires more than the 125 kW that the fuel cell can provide, additional power is supplied by the power buffer battery mounted above the electric motor.

In the past, BMW had repeatedly advocated FCEVs, but had not published any concrete plans as to when series-production models with the hydrogen-electric drive would come onto the market. Around the New Class, which is to be used from 2025, BMW had initially also referred to the possibility of building fuel cell cars based on this platform – but later it became known that BMW would at least initially rely on battery-electric drives.

Even now Nota does not comment on specific models, but narrows it down somewhat. “We see that hydrogen fuel cell technology is particularly relevant for larger SUVs,” the sales executive is quoted as saying by Nikkei. Fuel cells could also come from Japan in a possible large-scale production. “We have various projects we work on with Toyota,” Nota again says only in general terms.

BMW currently plans for electric-powered cars to account for half of its sales in 2030. EVs have been making up a larger portion of sales than expected, and “maybe if the current speed stays, we can reach that 50% one or two years earlier,” Nota said. However, he pointed out the hurdles that still exist for electric vehicles. Charging “infrastructure is not the same everywhere,” Nota added. “We do believe in the importance of various technologies — battery electric vehicles, also hydrogen and efficient combustion engines — because we don’t want to put all our investment in one area.”