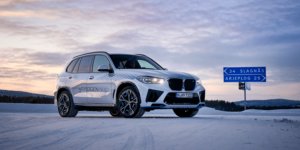 BMW has begun winter testing the iX5 Hydrogen in Sweden before going into small series production later this year. The focus is particularly on the performance at temperatures below freezing. Before entering a possible large-scale production, however, BMW has called for support from politicians; especially in terms of infrastructure.

Preparations for small-scale production of the model, then still called i Hydrogen Next, have been underway since May 2021, and in autumn the car, then renamed iX5 Hydrogen, was put on the road at the IAA in Munich.

Compared to Munich, the weather is significantly harsher at the BMW Group test centre in Arjeplog in northern Sweden, where the new car has to prove itself. During the winter testing, the engineers wanted to ensure the functionality of the fuel cell powertrain consisting of the fuel cell system, the hydrogen tanks, the power buffer battery and the central vehicle control unit under adverse conditions.

The result: “The winter testing under extreme conditions clearly shows that the BMW iX5 Hydrogen can also deliver full performance in temperatures of -20°C and therefore represents a viable alternative to a vehicle powered by a battery-electric drive system,” explained Frank Weber, Member of the Board of Management for Development. “For us to be able to offer our customers a fuel cell drive system as an attractive sustainable mobility solution, a sufficiently extensive hydrogen infrastructure also needs to be in place.”

If this infrastructure is in place, as it is at the BMW test centre, refuelling the hydrogen takes “three to four minutes”, as it did in summer, according to the statement. In addition, the range was “maintained without restriction in freezing cold” and the full system performance was available shortly after the start, BMW sums up.

“The hydrogen fuel cell drive system combines the best of both drive worlds, regardless of the time of year and outside temperatures: it offers the locally emission-free mobility of an electric vehicle and the unrestricted everyday usability – including short refuelling stops – familiar from models with an internal combustion engine,” says Jürgen Guldner, Head of BMW Group Hydrogen Fuel Cell Technology and Vehicle Projects.

The key technical data have largely been known since 2020: The hydrogen (up to 6kg) is stored in two 700-bar tanks made of carbon fibre composite material. The Toyota fuel cell in the engine compartment produces 125 kW, but the e-motor in the rear produces 275 kW. If the electric motor requires more than the 125 kW that the fuel cell can provide, additional power is supplied by the power buffer battery mounted above the electric motor. As in last year’s announcements, BMW does not specify the energy content of the buffer battery or the range of the iX5 Hydrogen.

In order to enter the costly fuel cell mobility economy, BMW is also relying on political backing. According to Guldner, the carmaker supports the EU plans to implement the AFIR (Alternative Fuels Infrastructure Regulation) for the parallel development of hydrogen filling stations and electric charging infrastructure. “We would even like to see an even more ambitious design and earlier implementation,” Guldner said. Instead of a 700-bar filling station every 150 kilometres by 2027, BMW is calling for the distances to be shortened to 100 kilometres.

Xpeng has started accepting orders for the P5 in Europe