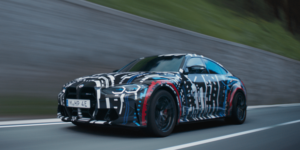 BMW’s sports car division BMW M has unveiled a technology carrier based on the BMW i4 M50 with a modified body in which “innovative drive and chassis control systems” are to be tested. These developments could later be used in an electric sports car.

BMW M intends to use the technologies to launch “the next chapter in the transformation toward electromobility,” according to the release. The concept testing will focus on a new all-wheel drive system consisting of four electric motors and an integrated driving dynamics control system. BMW promises the “ultimate driving dynamics” from the electric drive.

The Munich-based company is not yet naming performance data for the vehicle, but with the four electric drives, output is likely to exceed the 530 kW that a technology vehicle called the ‘Power BEV’ shown in 2019 had – the 5 Series sedan featured three electric motors. BMW does not specify whether the motors in the new technology carrier are the fifth-generation current-excited synchronous machines (which are quite impressive in the i4 and iX). It is more likely, however, that they are new types of motors – the current units are designed as axle drives and not for two electric motors per axle.

What is known is that all four motors are connected to a central, highly integrated control unit that “permanently monitors the driving condition and the driver’s wishes,” according to BMW. “The ideal power transmission to the road is calculated within milliseconds from the values for the accelerator pedal position, steering angle, longitudinal and lateral acceleration, wheel speeds and other parameters,” the company adds. “The signals for this are transmitted just as quickly and directly via a multi-plate clutch and differentials to the four motors, which are able to implement them immediately and precisely.”

The drive control was first developed in virtual models and later on the test bench before the system was integrated into the vehicle. However, road tests are still necessary for a “fully realistic application of the hardware and software developed for this purpose.” But already on the basis of the dyno tests, BMW claims that power and torque can be dosed so precisely within milliseconds “that the load demand signalled via the accelerator pedal can be realised at a level of dynamics that is unattainable using conventional drive systems.”

Other changes to the technology carrier relate to the chassis, for example. The front end of the vehicle features a body strut concept adapted from the BMW M3/ M4 series for particularly high torsional rigidity in extremely dynamic driving situations. The arrangement of the radiator units is also based on the configuration developed for current high-performance sports cars.

The core of the vehicle, however, is the electric all-wheel drive with four motors. “Electrification opens up completely new degrees of freedom for us to create M-typical dynamics,” says Dirk Häcker, Head of Development at BMW M GmbH. “And we can already see that we can maximize this potential so that our high-performance sports cars will continue to offer the M-typical and incomparable combination of dynamics, agility and precision in the locally emission-free future.”

BMW currently offers the i4 M50 and iX M60 under the M label. In 2023, the i7 M70 is to follow. The i5 will also reportedly get a performance offshoot called the M50. Production of the BMW XM, which will only be available with the M logo and exclusively as a plug-in hybrid, will also begin this year.

It is doubtful, however, whether an electric all-wheel drive with four motors will be used in a BMW i5 M50. Such an exclusive drive system would probably be suitable for a sports car. As reported by the German publication Auto, Motor und Sport, BMW is in talks with British sports car maker McLaren. In 2027 or 2028, this cooperation could result in two electric sports cars – a BMW model for around 250,000 euros and a McLaren for around 400,000 euros. “BMW would be responsible for the electric drive, the batteries and the software in the project. McLaren would provide its carbon-fibre lightweight construction and driving dynamics capabilities,” AMS wrote.