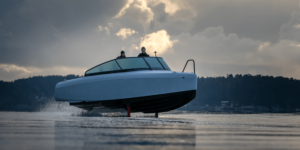 The electric car manufacturer Polestar will supply battery and charging systems for the electric boats of the Swedish company Candela. The aim of the cooperation is to rapidly increase the production of Candela’s electric hydrofoils.

The agreement is one of the world’s first direct collaborations between automotive and marine companies in the field of battery technology, Polestar writes in the statement. However, the electric car maker does not give any details on the exact scope of the off-take agreement.

There are also no exact details about the batteries. Polestar currently buys its battery cells from CATL and LG Energy Solution. Whether the carmaker will supply cells from its contingent, pre-assembled modules or even complete battery packs to Candela is not clear from the announcement. However, it does say that both companies want to explore further possibilities for expanded cooperation.

Candela builds electrically powered hydrofoils in which the hull rises out of the water while the boat is moving and only the wings remain in the water. This reduces water resistance and thus consumption enormously. It is also said to provide a much smoother ride experience for passengers.

Candela had unveiled the C-8 model for private customers in the summer of 2021, which is expected to pave the way for large-scale production of battery-electric hydrofoils. This June, Candela announced that it is also working on a shuttle hydrofoil called P-12, which will be tested in Stockholm in 2023.

“I am fascinated by way Candela’s boats glide elegantly and efficient through, or better, over the water – amazing proof of the great aesthetics and experiences modern, sustainable technology can create,” says Thomas Ingenlath, CEO of Polestar. “That Polestar will be part of future projects with Candela by supplying an essential part for the innovative propulsion of their boats, is awesome. As a battery supplier to Candela, we can help drive the transition to cleaner oceans and lakes, and electrify waterborne transport.”

Gustav Hasselskog, CEO of Candela, comments, “To make electric boats mainstream, we need to build thousands of boats every year. Working together with Polestar, we’re able to bring the scale of production and world class engineering from the automotive industry to the marine sector.”