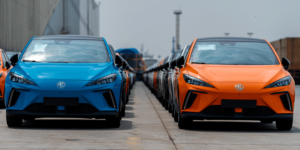 The first batch of MG4 Electric cars was shipped from China to Europe and arrived at the port of Zeebrugge, Belgium, last Friday. MG aims to launch over 1,000 units of the electric compact model simultaneously in nearly 20 European countries and China on 13 September.

In addition, the SAIC brand announced plans to launch the MG4 Electric in other countries and regions such as Australia, New Zealand, the Middle East and South America next year. MG Motor would thus be active in more than 80 countries around the world.

MG Motor has been accepting reservations for the compact electric car across Europe for just over four weeks. The first 1,000 reservations for the MG4 Electric, which will lead to binding purchases, are guaranteed to be delivered before the end of 2022, according to the manufacturer.

At the end of June, MG Motor gave more details about the compact electric car for European markets and a month ago also the first prices for Great Britain. There, the MG4 starts at 25,995 pounds, which currently equals about 30,800 euros. The variant with the 64 kWh battery costs at least 28,495 pounds (33,860 euros). However, German prices are still not known.