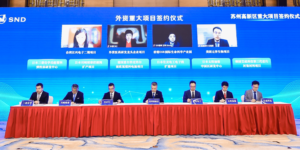 EKPO Fuel Cell Technologies, the fuel cell joint venture between ElringKlinger and Plastic Omnium, is expanding its activities in China by establishing a Chinese subsidiary. The aim is to manufacture the first stacks in the city of Suzhou before the end of the year.

The subsidiary will operate under the name EKPO China and will be located in the city of Suzhou, west of Shanghai. The company says it is investing a mid-single-digit million euro amount in the site there as a first step. The intention of the startup is to further develop the Chinese fuel cell market, according to an accompanying press release.

The FC joint venture had already turned its attention to the Far East at the end of 2021: at that time, EKPO entered into a partnership with the German-Chinese system integrator DR Powertrain System to develop fuel cell systems with EKPO stacks for the Chinese market. Even at that time, EKPO shareholder ElringKlinger indicated that EKPO’s Chinese site in Suzhou, with its proximity to Shanghai, would serve as a hub for further FC activities in Asia.

With the subsidiary now launched and an agreement with the local government to inject subsidies, the joint venture’s business strategy is manifesting itself. “China is a key future market for EKPO. Our market-leading stack technology offers high-performance products and makes a decisive contribution to sustainable mobility in the world’s largest automotive market,” says Gernot Stellberger, one of EKPO’s managing directors. The planned foundation is the logical next step in establishing local value creation in fuel cell technology in China. “The goal is to manufacture the first stacks in Suzhou before the end of this year.”

The establishment of production capacity in Suzhou follows the installation of a fuel cell test stand earlier this year. According to the company, the decision to make the multi-million investment at the site was based on “very positive feedback from several successful fuel cell projects with local customers.”

EKPO describes itself as a full-range supplier of fuel cell stacks and components with a focus on the passenger car market, light commercial vehicles, trucks and buses. The joint venture was established in October 2020, with ElringKlinger holding a 60% stake and French company Plastic Omnium 40% in the company. According to the company’s own information, the joint venture currently has a production capacity of initially up to 10,000 stacks per year, which is to be “gradually expanded in line with the order book”.