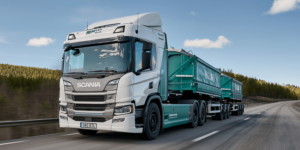 Scania Group wants to dispense with the combustion engine by 2040 and only launch battery-electric vehicles, said Christian Levin, President and CEO of Scania and CEO of Volkswagen’s Traton in an interview. With this formulation, Scania is venturing ahead of its competition in the truck market.

However, speaking to Eurotransport.de, Levin admitted that the general conditions must be suitable for Scania to phase out the internal combustion engine – specifically: “charging infrastructure, green electricity and the price per kilowatt hour”. However, Scania is “the only truck manufacturer to go so far as to question the diesel engine as early as 2040,” the manager emphasised. Meanwhile, Traton, to which Scania belongs, and which oversees commercial vehicles in the Volkswagen Group, targets selling every second commercial vehicle with an electric motor by 2030 as an interim goal.

In the interview, Levin also said that Germany could do more to promote the ramp-up of electric trucks, citing incentives, the development of the network, energy supplies and the simplification of permits. Additionally, he explained that if one wants to electrify the whole of Europe, one must assume that 30,000 to 40,000 truck charging stations will be required.

Traton, together with Daimler Truck and Volvo, wants to initiate the development of a high-performance charging network for heavy trucks and coaches in Europe with an initial 1,700 charging points. With this in mind, the trio established its previously announced joint venture called Commercial Vehicle Charging Europe in July.

Within five years, the high-power charging points will be installed and operated at and near highways and logistics hubs in Europe. The joint venture intends to set up and operate the 1,700 stations as a Charge Point Operator (CPO). In this way, CV Charging Europe is emulating its role model from the car world: In Ionity, the manufacturers have also created a provider that has set up a fast-charging network for electric cars across the entire continent – and is continuing to expand it.

In spring, the Traton Group announced that it would be increasing its investments in research and development for electromobility. The company is now raising 2.6 billion euros for this purpose by 2026, compared with the 1.6 billion euros planned by 2025. At the same time, Traton is scaling back its investments in combustion engines. The background is that the Group wants its brands to play a leading role in sustainable transport.

“Together with its brands, the Traton Group will assume a leading role in sustainable transportation. This is why we have consistently aligned our planning for the next five years to focus on battery electric drives,” CEO Levin expressed at the new budget planning in March. This is “clearly the greenest, fastest, and most affordable solution for our customers, even for long-haul transportation, although hydrogen may prove to be a useful addition in certain niches.” Traton thus continues to prioritize pure battery-electric solutions but does not completely rule out hydrogen as another alternative form of propulsion.

Even before the combustion engine phase-out date, it was clear that Scania was to lead the way in the Group’s BEV development. The brand makes industrial and marine engines in addition to trucks and buses. Research and development are located in Sweden, Brazil and India, while production takes place in Europe, Latin America and Asia. Worldwide, the OEM employs about 51,000 people.

Former Scania CEO Henrik Henriksson described the launch of a BEV as well as a PHEV truck for urban distribution in November 2020 as “a prelude to our commitment to long-term electrification.” Over the next few years, he said, new electric vehicles will be launched annually across the product range. “It is of particular importance that in a few years we will also introduce electric trucks for long-haul transport that are designed for quick charging during the mandatory 45-minute rest periods for drivers.”

Incidentally, in addition to BEVs and PHEVs, Scania has another electrified truck variant on offer – but not for regular sale. The Swedish company is a partner of the German eHighway test trials and, as such, is providing the 15 converted trucks with pantographs for the three test routes in Hesse, Schleswig-Holstein and Baden-Württemberg.