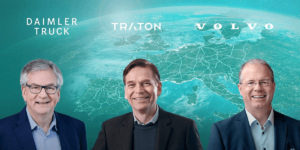 Daimler Truck, the Traton Group and the Volvo Group have now signed a binding agreement to establish the joint venture that they had announced in July. The aim is to establish and operate a public charging network for battery-electric heavy-duty long-haul trucks and coaches in Europe.

The joint venture, which will be headquartered in Amsterdam, is to be held equally by each of the three parties and will begin operations in 2022 as soon as all regulatory approval procedures have been completed. As announced in the summer, the trio plans to invest a combined 500 million euros. Daimler says that this sum is: “to our knowledge, by far the largest investment in charging infrastructure for heavy trucks in Europe to date.” No big surprise there, since the three truck makers are some of the largest in Europe.

As far as the charging network plans are concerned, the key points announced in July apply: For example, at least 1,700 high-performance charging points are to be set up near highways and at logistics hubs and unloading zones within five years of the joint venture’s establishment. According to the partners, the charging stations will be operated exclusively with green electricity and made available to all users across all brands.

The initiators are not disclosing any technical details about the planned charging points at this time, so for the moment, charging standards, charging power and the planned size of the charging parks remain unclear. The partners have only repeated what was said in the summer, that they want to consider different use cases “as part of a customer-centric approach” – i.e. both charging during the legally prescribed 45-minute rest period for drivers, as well as slower charging overnight.

In many other respects, too, the current Daimler announcement on the establishment of the joint venture follows the wording of the announcement made in the summer: for example, beyond the current plans, “the number of charging points is with time intended to be increased significantly by seeking additional partners as well as public funding.” The joint venture would be given the task of operating independently, building “on the broad experience and knowledge of its heavy-duty trucking founding partners.” Daimler also again points to a report by the industry association ACEA saying that up to 50,000 high-performance charging points would be needed in Europe by 2030 at the latest.

Martin Daum, CEO Daimler Truck said: “Today’s signing announcement is great news for the transport industry and society, as it underlines all of the partners’ strong commitment to making CO2-neutral trucks a reality. It is remarkable that three fierce competitors in the area of trucks and vehicle technology are taking action together to start establishing the needed charging infrastructure. Together with Volvo Group and the Traton Group, we want to send a clear signal to all relevant stakeholders to follow our lead and act now.”

Christian Levin, CEO of Traton Group, adds, “A collaboration with strong competitors like Daimler Truck and Volvo Group might seem unusual. However, the topic is of crucial importance and this unique cooperation will make us faster and more successful in delivering the transformational action needed to tackle climate change. Our joint venture will be a strong push for the rapid breakthrough of battery-electric trucks and coaches, the most efficient and sustainable transport solutions.”

And Martin Lundstedt, President and CEO Volvo Group, also agrees: “Innovative partnerships like these will enable the much-needed change that will benefit our customers — and the entire industry. This is both a historical milestone in the transformation towards fossil-free transport.”

Daimler Truck and the Volvo Group are already working together in the fuel cell joint venture Cellcentric. Traton is not part of it, as the VW commercial vehicle subsidiary focuses primarily on battery-electric mobility and sees the fuel cell as having an advantage only in some special applications. So while Traton is mainly planning battery-electric long-haul trucks, Daimler and Volvo are on two tracks here. Daimler Trucks is also putting in considerable investment in hydrogen infrastructure.

Daimler Truck, Traton and Volvo have received regulatory approvals for the planned joint venture for an electric truck charging network. As a result, the three partners have established the joint venture, which is based in Amsterdam. As suspected, the joint venture will be headed by Anja van Niersen as CEO.

As announced last year, the joint venture plans to build and operate at least 1,700 high-capacity green power charging points on and near motorways and at logistics hubs in Europe. The three partners want to invest a total of 500 million euros for this purpose. According to the companies’ knowledge, this is by far the largest investment in charging infrastructure for heavy trucks in Europe to date.

The joint venture will push ahead with the ramp-up of its activities, especially the development of the charging network, in order to be able to offer public charging stations for heavy commercial vehicles with a focus on reliability and good accessibility, according to the statement.