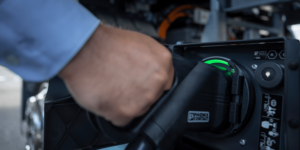 The two companies have each signed a letter of intent with Mercedes-Benz Trucks. Rhenus, a logistics service provider, will use the e-truck in many different business areas. Daimler lists the transport of sea containers and a tarpaulin trailer in daily operations, apparently also for Amazon.

Michael Scheib, Head of Product Management, Mercedes-Benz Trucks, said they always rely on early practical tests with customers. The engineers would then “incorporate valuable knowledge gained from real-world operations – especially with regard to high-performance charging – directly into the development of the series-production vehicle.”

Sascha Hähnke, Managing Director of Rhenus Transport, said they will have to use “every charging alternative” if ever more electric trucks would come to the roads. “Of course, this includes high-performance charging on the road and, ideally, during the statutory rest periods. This is the only way to achieve optimal truck capacity utilization,” he said. Still, he added, depot charging formed the basis for the use of battery-electric commercial vehicles.

The eActros LongHaul is already undergoing “intense testing” internally, so Mercedes, with said road testing, will follow this year before the series production will kick off by 2024. Mercedes specifies a range of around 500 kilometres on a single battery charge. The long-range, in combination with megawatt charging, would result in ranges on a par with conventional trucks and thus enables two-shift operations, so Mercedes.

As for next year’s testing in HoLa with Amazin and Rhenus, Mercedes engineers will accompany the customers throughout. They will collect feedback through regular interviews and questionnaires to further develop the prototypes and charging technology. The prototype trucks also bear instruments for internal measurements during operations.

Mercedes-Benz Trucks revealed the eActros LongHaul prototypes this May. The 40-ton truck was designed for long-distance routes and differs from the eActros made for urban distribution with a 200-km range.

Daimler Truck is also working with Traton and Volvo in a joint venture for an electric truck charging network, as reported. The Amsterdam-based JV is headed by Anja van Niersen and plans to build and operate at least 1,700 HPC chargers on and near motorways and logistics hubs in Europe.

Schaeffler to debut fuel cell van at the IAA in Hanover