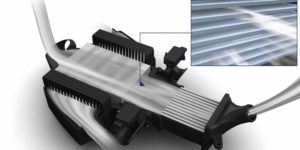 Mahle & Cellcentric, the fuel cell joint venture of Daimler Truck and Volvo, have signed a letter of intent to cooperate in the field of fuel cell technology. This concerns both the use in heavy commercial vehicles, but also “other applications with comparable requirements”.

According to automotive supplier Mahle, the cooperation will focus on the development and series production of the flat membrane humidifier. Among other things, this system component improves the durability of the fuel cell and thus ensures a longer service life, according to Mahle. The flat membrane humidifier is to be used both in fuel cell systems for commercial vehicles and in stationary systems, such as emergency power generators.

Mahle further writes, this component plays a supporting role in the fuel cell system. In order to work as effectively and efficiently as possible, fuel cells must be supplied with sufficient fresh air and humidity. To ensure the correct moisture content in the fuel cell, conventional humidifiers use small hollow membrane fibres. The humidifier newly developed by Mahle uses very thin membranes instead, which are stacked in layers in the humidifier and are thus intended to ensure effective humidification of the fuel cells. The rule of thumb is: the higher the humidity in the fuel cell, the more efficiently it works and the longer its service life.

Cellcentric is currently building its FC factory in Weilheim an der Teck. There, fuel cells are to be built for the heavy commercial vehicles of the two shareholders, but also for use in the emergency power generators mentioned as an example. When fully completed, the plant is to cover 60,000 square metres, but only 30,000 square metres are planned by 2030.

“Cellcentric has the intention to become a world leading manufacturer of fuel cells. Our fuel cell is explicitly designed for use in heavy trucks. Accordingly, it meets the high quality requirements of the automotive industry and the relevant standards,” says Cellcentric CEO Matthias Jurytko. “With Mahle, we have a partner at our side that has decades of experience as an automotive supplier as well as broad expertise in fuel cell peripherals.”

Martin Wellhöffer, Corporate Executive Vice President Sales & Application Engineering at the Mahle Group, added: “The agreement reached between MAHLE and cellcentric represents a valuable step towards a joint strategic future in the development of zero-emission powertrains.”

It is not clear from the announcement by when a binding cooperation agreement is to be negotiated following the declaration of intent.

Batteryloop to give Mercedes batteries a second life