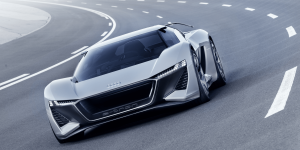 According to a British media report, Audi’s R8 combustion sports car is to be discontinued at the end of 2023 and receive an electric successor towards the middle of the decade. This electric sports car is already under development but has not yet been finally decided.

As the magazine Autocar writes, however, it is not to be a direct new edition of the R8: The model is to be given a new name and also take a completely new design direction. It will be produced at the Böllinger Höfe in Neckarsulm, where the current R8 and the all-electric e-tron GT and RS e-tron GT models are made.

According to the Autocar report, there are two options as a platform for the purely electric R8 successor: The sporty version of Volkswagen’s Scalable Systems Platform (SSP), which Porsche reportedly plans to use in the new generation Taycan, the electric Panamera as well as in a new electric SUV, or a sports car platform that Porsche is developing for the electric successors to its mid-engine 718 sports cars.

Both platforms have advantages and disadvantages. The SSP is primarily intended for sedans and SUVs. So for a two-seater sports car, the platform would have to be able to be scaled down somewhat. Porsche’s 718 models, on the other hand, are positioned a good bit below the R8, so the platform here would have to give room to move up in order to set Audi’s electric sports car apart from the more compact Porsche models.

There were already rumours of an Audi electric sports car as the successor to the R8 in 2019. At the time, however, it was said that Rimac would supply the drive technology – four electric drives with a total of 700 kW and a 95 kWh battery with solid fuel cells. If the current report is correct, the Rimac option would probably be off the table.

Despite the new orientation of the model, the R8 successor is to retain the “halo positioning” in Audi’s model portfolio, according to the report – in other words, it is to be developed and built separately from the other model series. The similarities with the current R8 probably end with the two-door body concept. A rendering by Autocar of the potential successor resembles the PB18 e-tron concept shown in 2018 at the front, but looks more like a conventional mid-engined sports car with its flat rear and large air intakes in front of the rear wheels.

Regardless of which platform Audi decides on, it will probably remain with the manufactory production in Neckarsulm. “Absolutely we will keep craftsmanship as it’s what makes the car unique from the rest of the portfolio,” said Sebastian Grams, head of Audi Sport “If we bring an R8 successor, we will try to continue to do that. It is important for the customer. There’s love inside an R8.”