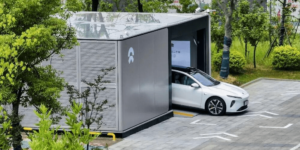 The Chinese electric car manufacturer Nio has opened its production facility in Hungary, where battery swapping stations for Europe are manufactured. Nio announced that the first station produced there was just delivered to Germany in the last few days.

The plant in Hungary was announced by Nio at its second Power Day in early July this year. The production facility is meant to support Nio’s goal of building a total of 1,000 battery exchange stations outside China by 2025. Nio plans to launch in Germany in 2022 and has said that it would also introduce “its products and holistic service system to the Netherlands, Sweden and Denmark” this year.

The site of the facility in Biatorbágy, Hungary, is Nio’s first overseas plant and will also serve as a service, research and development centre for Nio’s charging products in Europe. In addition to battery exchange stations, the manufacturer also relies on its own fast charging stations.

Nio says that, at the Hungarian plant, “the focus is on the manufacture and after-sales service of power-swap stations, training and innovation of power products.” The company says the research and development centre is to work closely with Nio centres in Oxford and Silicon Valley in this regard.

After the launch of its second-generation battery exchange station last year, Nio gave a first preview of the third generation of the technology at the aforementioned Power Day in the summer. This is supposed to offer even greater capacity and a more flexible layout. In July, Nio said that the third-generation battery exchange station was nearing the end of its development and was currently still being tested. There are indications that the stations will be able to charge bidirectionally to support grid stability. Nio further details will first be revealed at end of this year or the beginning of next year.

According to information from the summer, charging columns are also to be produced at the Hungarian plant in order to meet demand in Europe, as is the case with the exchange stations. The Chinese company recently presented a new 500 kW fast charging station.

In July 2021, Nio was granted TÜV certification to be able to sell and operate the current generation of its battery exchange stations and chargers in all EU member states. Only recently, in mid-August 2022, the company announced the opening of a second battery exchange station outside China, which is in Norway, along with the first station. The new station in Vestby, Norway, will act as a link between Oslo and Gothenburg. Nio opened its first battery exchange station outside China in Oslo in January. While initially announcing four stations in the greater Oslo area (which still includes Vestby), Nio also announced expansion beyond the capital region a month ago.