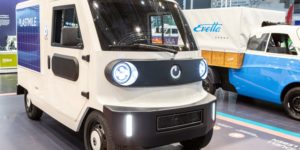 ElectricBrands has unveiled three prototypes in different vehicle categories at IAA Transportation. The German EV  maker officially declared these “world premieres”, however, one concept is already known, and the other two are new.

Take the XBus S, a study and smaller version of ElectricBrands’ core vehicle, the four-wheeled XBus. While the nearly four-metre vehicle will also be offered to private customers, the XBus S is designed as a last-mile delivery vehicle for B2B clients. At 3.20 metres, it is about 75 centimetres shorter, still 1.43 metres wide and 1.73 metres high. Depending on the body, the payload is up to 750 kilograms, the load volume up to 1,656 litres.

Like its big brother, the XBus S will have an all-wheel, front or rear drive, all electronically controlled. One fixed on-board battery is 8.4 kWh but exchangeable batteries can expand the energy content by ten kWh to up to 18.4 kWh for a range of 120 kilometres. In addition, solar modules of up to six square metres can be integrated into the body.

As reported earlier this month, production of the “large” XBus will no longer occur at ElectricBrands, but at an undetermined contract manufacturer. ElectricBrands has yet to make any concrete statements on XBus S production but talked about two chassis in the XBUS family in the medium term. The smaller S model is planned for 2024.

Also on display at IAA is the Evetta Cargo, another variant of ElectricBrands’ light electric vehicle, which the company envisions serving as coffee sales van and other urban delivery and business trips, for example. The vehicle was already on show in the summer when ElectricBrands presented the XBus camper van. Now the company revealed that up to 1,950 litres can be stowed under the tarpaulin. The range is 150 kilometres, which means that “the Cargo”, as the vehicle is called, should be able to “master just about all urban delivery routes”. The cargo area is 1.50 metres long and 1.30 metres wide, the payload is 600 kilogrammes.

The third prototype shown in Hanover is an electric scooter called Nito C+S (Cargo and Share), again designed for delivery and sharing services. Nito C+S claims to be able to carry up to 100 kilograms without loss of power. The drive has an output of 4 kW. ElectricBrands plans to launch two versions, one with a maximum speed of 45 and one with a maximum speed of 90 km/h for different driving licence classes and areas of use.

ElectricBrands is looking to produce and sell light electric vehicles of different kinds, primarily using the XBus platform. The most recent example of an acquired concept is Artega’s small EV Karo, formerly Microlina and now marketed as Evetta under the new owner ElectricBrands.