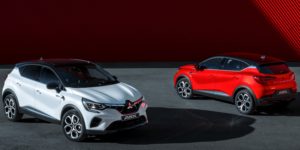 Mitsubishi has unveiled the new ASX for Europe. The new edition of the compact SUV, an offshoot of the Captur already offered by Group competitor Renault since 2020, is offered as a plug-in hybrid, full hybrid and mild hybrid.

The plug-in hybrid thus also corresponds to the familiar powertrain from the Captur. The 1.6-litre gasoline engine is combined with two electric motors, resulting in a total system output of 116 kW and 300 Nm of torque. The heart of the sophisticated PHEV drive is the so-called “multi-mode” transmission.

A 10.5 kWh battery enables a purely electric range of up to 49 kilometres. The ASX is the first Mitsubishi model in Europe with a full hybrid drive. The drive combines a 1.6-litre gasoline engine with two electric motors and a battery capacity of 1.3 kWh.

There are no significant changes to the body compared with the Renault technology donor – apart from the brand logos. Mitsubishi has opted for a minimally differently designed radiator grille to match the logo. At the rear there is now a large lettering instead of the diamond logo, as on the Renault (and previously untypical for Mitsubishi).

The new Mitsubishi ASX will be available in showrooms in March 2023. Mitsubishi has not yet announced prices; the Captur plug-in hybrid is currently available in the UK from Renault, starting at £23,795 in the Techno trim.