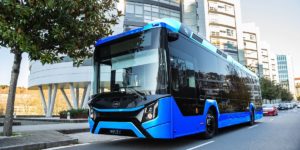 BYD has signed a framework agreement with Castrosua, a Spanish manufacturer of bus bodies. BYD and Castrosua will work together to offer locally manufactured 12-metre electric buses specifically for Spanish customers.

These will combine BYD’s electric powertrain chassis with Castrosua’s Nelec body. The first BYD-Castrosua 12-metre electric bus is already in development and should be available soon. BYD has been running a similar partnership in the UK for several years with bus builder Alexander Dennis (ADL).

In the announcement, BYD does not specify exactly which electric bus chassis is involved in the new partnership with the Spaniards. The Chinese manufacturer builds quite conventional-looking electric buses (also in Europe) with batteries on the vehicle roof. At the IAA Transportation last week, BYD had presented a completely new electric bus chassis in the 12-metre class, in which the manufacturer’s LFP batteries are installed in the underbody. As the announcement states that the BYD-Castrosua 12-metre bus combines “BYD’s most advanced chassis” with Castrosua’s Nelec body, it could already be the new development unveiled at the IAA.

BYD is not yet going into detail about the electric drive system, the batteries and the range of the buses. It is said in general terms that the strategic cooperation between BYD and Castrosua is dedicated to the production of “tailor-made products that meet the requirements of the Spanish market” – with a focus on Class I and II electric buses for urban and commuter transport.

The agreement includes not only the supply of the chassis, but also a “high-quality and effective after-sales service with professional and customer-oriented technical support from both sides, as well as spare parts supply”.

“We highly value our local partnerships and it is especially significant that the tailor-made eBuses will be manufactured locally in Spain, for Spanish customers,” says Javier Contijoch, BYD Europe eBus Vice President of Sales. “Together we are poised to expand zero-emission electric bus fleets throughout Spain to provide a cleaner environment for Spanish people.” Beatriz Castro, CEO of Castrosua Group, adds: “Castrosua and BYD now combine their strengths with the clear objective of offering customers highly personalised and innovative electric bus solutions.”