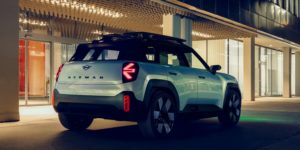 Mini will stop producing electric cars in England in 2023 and move them to China, British media reports. BMW makes around 40,000 electric Minis a year at its plant in Cowley on the outskirts of Oxford. Production is due to cease there next year despite the company’s far-reaching EV plans.

In addition to the electric Mini currently built in Oxford, production of which will be moved to China, BMW’s joint venture with Great Wall Motor is also to produce the electric Mini Aceman locally in China. The Mini Countryman successor, also due for electrification, will roll off the lines of the BMW plant in Leipzig in 2023, as reported.

In the UK, however, BMW is to axe all production of the electric Mini and switch it to China, dealing a significant blow to hopes that Britain could be a global hub for zero-emission vehicle manufacture, writes The Times, apparently referring to company circles although BMW has yet to make an official statement. The Times also called the plans “another hit to the UK’s pretensions to become a leader in global electric car manufacturing”.

As for Mini at Cowley, it will not be the end – yet. BMW will continue to build Minis and convertibles for export to markets such as the US, Japan and the Middle East. BMW confirms that it will not halt Mini production with internal combustion engines until the 2030s.

This is in line with the usual product cycles of seven to eight years. However, Mini will reportedly become a pure EV brand in 2032/2033 since BMW has long targeted making Mini electric by the early 2030s.

Whether the Oxford plant will be part of this future appears uncertain.

Stefanie Wurst, the new head of Mini, speaking to The Times, would only state: “Oxford will always be the home of Mini.” Wurst added that when (or if) electric Minis were to be built again in Britain, it would be on an assembly-line platform developed by Great Wall and that the existing Cowley lines would be stripped out as part of a major factory overhaul.

“Oxford is not geared up for electric vehicles,” she said. “It will need renovation and investment.” Asked when electric Minis will return to Oxford, she said: “There is no date.”

The historic Cowley factory has been the subject of speculation that BMW wants to sell the plant to Great Wall. It has made no secret that its big sales push into the European electric market will eventually lead it to seek European production facilities.

Asked by The Times whether Oxford could at some time in the future build both Minis and Great Wall brands such as Ora and Wey, Wurst replied: “Maybe.”

Wurst also dismissed suggestions that British consumers may balk at buying a Mini made in China, saying she could “see no reason” as UK motorists are already purchasing some BMW models made in China.

Mini aims for the coming electric models to be based on a pure EV platform, coming from JV partner Great Wall. According to Wurst, this would make production in Oxford, where combustion engines are still being built, “inefficient”. If E-Minis are to be built there again, Wurst says it will be on a Great Wall platform, but this would mean removing a large part of the existing production lines at the site.

She stressed that the decision to halt the electric Mini assembly in the UK was not linked to post-Brexit or the lack of a nearby gigafactory but because the Cowley plant was running inefficiently by having to produce electric and petrol cars on the same line.

The Times suggested political turmoil and recent issues surrounding the only planned gigafactory in the UK by Britishvolt might have urged Mini’s decision.