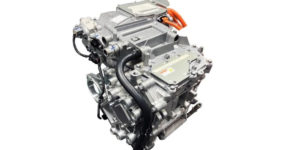 Nidec has started series production of its second-generation electric axle drive system. The drive solution called Gen.2 has recently been produced in Guangzhou, China. It is said to offer higher torque and power density at a lower weight.

Nidec’s Chinese subsidiary Guangzhou Nidec Auto Drive System has initially begun manufacturing the 100 kW variant of the new E-axis. The other models from the Japanese company’s electric drive kit are also to be gradually built in second generation. Nidec is known to offer electric axles with up to 20o kW.

Nidec cites a 19% reduction in weight and a 20% increase in torque and power density as the key features of the new 100 kW electric axle (compared to its 100 kW predecessor). This is said to have been made possible by the use of smaller magnetic circuits and inverters, according to a company release. In addition, the magnets used now use less critical rare earth metals, cooling has been changed to an innovative oil cooling system, and motor noise has been reduced by 6 to 8 decibels.

Nidec says it has produced more than 520,000 units since launching mass production of its electric axle in April 2019. The basic model of Nidec’s electric drive kit, the 150 kW Ni150Ex, was unveiled in 2018 – with Chinese manufacturer GAC as the launch customer. In the spring of 2019, the Japanese company announced variants with 100 and 70 kW output, before then unveiling the 50 and 200 kW power stages in February 2020. With the range of 50 to 200 kW engine power (or more if there are two engines in the vehicle), Nidec can cover the A to E vehicle segments, from compact cars to luxury cars.

The group aims to achieve a 40 to 45 per cent market share in EV traction motors by 2030, according to its own targets. So far, the company has confirmed agreements with Geely brands Zeekr and Geometry, GAC and Foxconn. In Europe, Nidec manufactures electric motors in a joint venture with PSA and others.