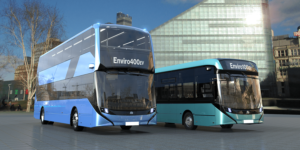 Alexander Dennis Limited (ADL) has expanded its range of zero-emission buses. The British bus manufacturer has now unveiled the electric Enviro400EV double-decker and the Enviro100EV midibus, as well as revealing a new generation of the hydrogen double-decker Enviro400FCEV.

Announced in August this year, the new models will be on display at the Euro Bus Expo 2022 in Birmingham. All three are based on a new NFI Group platform for BEVs and FCEVs, which ADL says incorporates “insights from across the NFI Group“.

The existing Enviro400EV model from the collaboration between BYD and ADL launched in 2019, has two BYD drives with a maximum of 150 kW each and iron phosphate batteries from BYD with 375 or 382 kWh on board. The model holds 87 passengers, including 72 seats. The stated range is up to 160 miles (around 257 kilometres). The Enviro400EV, now designed under ADL’s sole responsibility, is said to have a peak power of 410 kW and will be offered with two battery options (472 or 354 kWh). In the new model, ADL is switching to NMC for cell chemistry. The manufacturer quotes a passenger capacity of 96 passengers and a maximum range of 260 miles (around 418 kilometres).

Key features highlighted by ADL include an improved seating arrangement in the lower deck, the installation of Voith’s VEDS electric drive system with a permanent magnet traction motor, and an in-house developed battery design, with the battery system being fitted by Impact Clean Power Technology. The polish company does not name its cell supplier.

In terms of its design, differences to the previous double-decker are noticeable at the front, for example, in the headlights. In addition, all-around glazing and a more inclined windscreen are said to have improved the driver’s view.

Alexander Dennis has said that it wants to “continue to offer the extremely successful electric buses of the BYD-ADL partnership”. These are the Enviro200EV as a single-decker and the said Enviro400EV as a double-decker. The latter is also available in a short version.

Meanwhile, ADL will also be showing the Enviro100EV in Birmingham, which is an 8.5-metre-long and 2.35-metre-wide electric midibus. The vehicle carries up to 45 passengers, including 25 seated. The drive system also comes from Voith. Alexander Dennis, has not disclosed performance data, saying only that it is the “medium-duty version” of the system, which is designed for smaller vehicles. The NMC battery on board stores either 236 or 354 kWh of energy, which should be enough for ranges of up to 285 miles (about 459 kilometres).

Both new models are said to have been “specifically designed to meet the unique requirements of bus operations in the UK and Ireland”. The electric buses are to be launched via sales partner AD24 and are expected to be available in 2023. ADL says that the first orders have already been received. 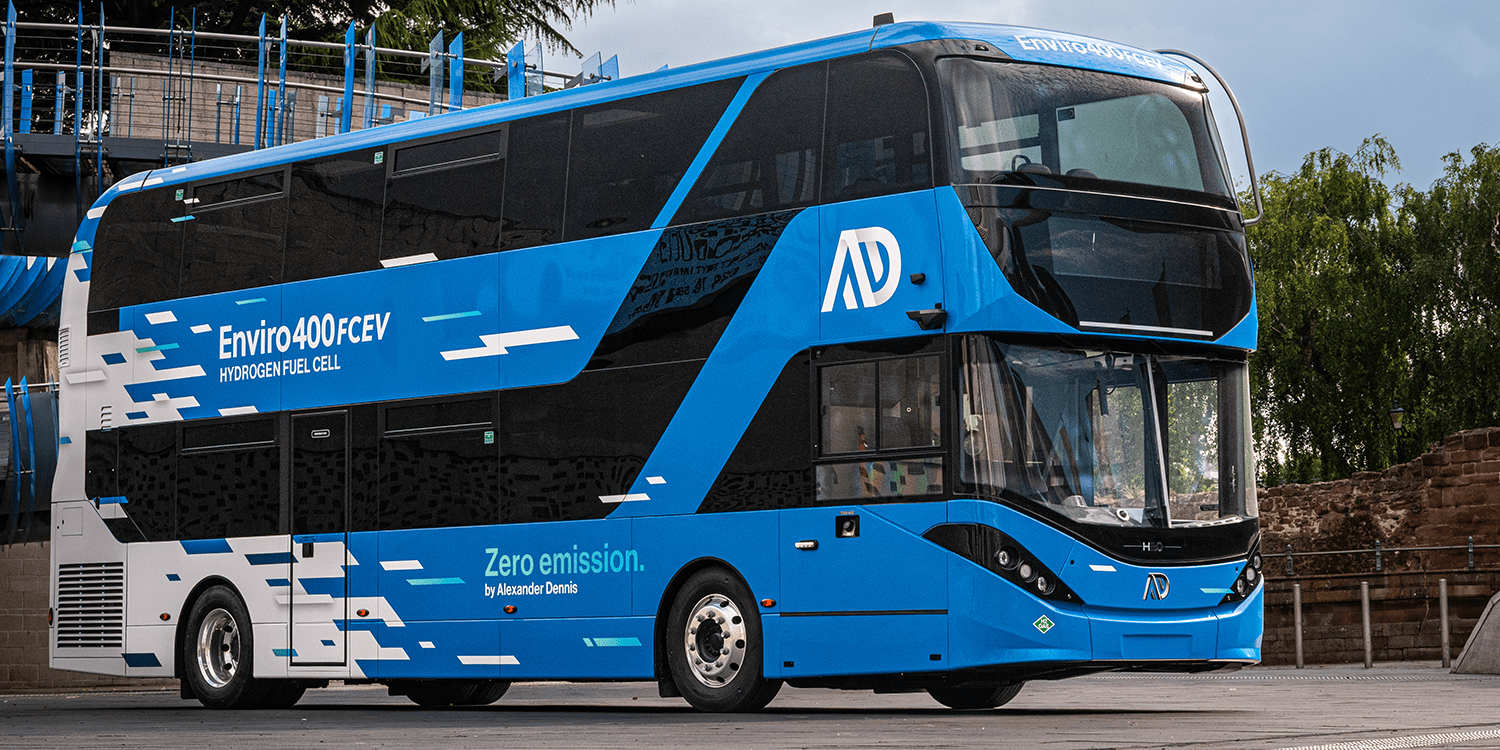 Parallel to the BEV models, the bus manufacturer is also exhibiting the next-generation hydrogen double-decker Enviro400FCEV at the fair. From the outset, there was no cooperation with BYD in this technology field. Already on order, 20 examples of the new model will be put into operation in Liverpool. Deliveries are to start in the coming weeks.

Announced in March 2021 under the project name H2.0, the full technical specifications of the Enviro400FCEV are now available. Thus, the 11.1-metre-long double-decker will be able to accommodate up to 88 passengers, of which up to 73 will be seated. Like the new Enviro400EV from ADL, the hydrogen double-decker will also be equipped with the Voith VEDS drive, but with a peak power limited to 350 kW.

The fuel cell on board comes from Ballard (“FCmove-HD”) and has 45 or 60 kW, the 350 bar tanks hold 29.4 kg of hydrogen and can be refuelled via two tank connections on both sides of the vehicle. The small battery with LTO chemistry on board – also assembled by Impact Clean Power Technology – has a capacity of 30 kWh. ADL claims a range of up to 300 miles (around 482 kilometres).