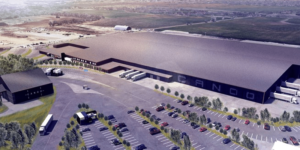 The eMobility start-up Canoo has announced that it will buy a vehicle production facility in Oklahoma City. Canoo plans to produce its Lifestyle Vehicle (LV) and its cargo variant Lifestyle Delivery Vehicle (LDV) at the plant, which are to be delivered to customers from 2023.

Canoo is also reportedly building an assembly plant for battery modules in Pryor in the US state of Oklahoma. Pryor is located about 150 miles or 240 kilometres northeast of Oklahoma City. According to earlier information, vehicle production of the van was also planned in Pryor, but this will now be located in the state capital. Canoo has not disclosed the purchase price.

The company says it has concluded an “agreement to acquire a vehicle manufacturing facility” – in other words, it is a plant that has already been built, is ready for occupancy and probably already has production equipment installed. Otherwise, with a purchase in November 2022, it would hardly be possible to realise a start of deliveries in 2023.

Canoo says it wants to start with 500 employees and train additional staff at the training centre located there. The facility is equipped to grow to 20,000 employees. In addition to this potential, the strategic location with easy access to road and rail is also highlighted.

Before deciding on Oklahoma City, the company says it examined several (undisclosed) potential locations. With the planned battery assembly in Pryor, and the announced vehicle plant in Oklahoma City, the state joins neighbouring Arkansas as “anchor states” for Canoo. The company had moved its headquarters from California to Bentonville in Arkansas and has set up a low-volume production facility there – which is also where vehicle manufacturing will initially start before the facilities are relocated to Oklahoma City.

“The Oklahoma City facility has significant room for expansion and is a proven location for large scale production, with an established transportation ecosystem, including rail,” says Canoo CEO Tony Aquila. “We are working with our third-party manufacturing partners to achieve SOP on our own equipment this month. Following these initial builds, we will aggressively shift all our equipment into our new facility during 1H’23 with a production ramp in 2H’23.”

Canoo faced some financial difficulties in spring 2022, admitting that these even threatened the company’s existence. But in the summer the company landed a major contract from US retail giant Walmart. Later, however, it became known from a stock exchange announcement that Canoo had to make Walmart some expensive promises for the order – such as discounted stock options and also the obligation not to sell any vehicles to Amazon for the duration of the delivery deal and also not to let itself be taken over by the online giant.