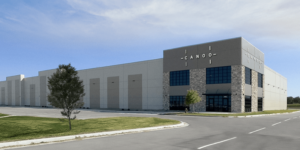 Canoo announced plans for a battery module manufacturing facility in the US state of Oklahoma. The plant will be fully operational, producing modules from Panasonic battery cells with a total annual capacity of 3.2 GWh. Construction is scheduled to begin before the end of the year.

The module assembly plant is to be located in the MidAmerica Industrial Park in the town of Pryor. Canoo is also reportedly locating a vehicle manufacturing facility in this industrial park. The location was chosen for this very reason, but also in view of the proximity to battery cell partner Panasonic, Canoo says. In addition to modules, the new plant will also produce energy management and thermal control components for the company’s MPP platform. Canoo plans to operate the plant with hydropower, among other things.

Canoo is deliberately forging close ties with the US state of Oklahoma. The startup not only wants to locate the plant for the large-scale production of its pod-shaped van (production is planned to start in 2023, according to earlier statements) and the module assembly plant there, but also to establish new centres – including for vehicle and software development, customer support and financing – in the state.

Canoo wants the local commitment to be seen as contributing to the transformation of the corridor along Route 412 from Oklahoma to Arkansas into a centre for electric vehicle research, development and production. According to an earlier report by Reuters, Canoo CEO Tony Aquila has said that purchase commitments have been made in return in the regions where the new facilities are being built: “We are seeking about $100 million worth of vehicle orders … where we locate these facilities,” he is quoted as saying in the news agency’s report.

In recent months, meanwhile, Canoo announced several orders from US companies. In July, Walmart ordered 4,500 electric vehicles, with an option for 10,000 units. This was followed in October by an agreement with fleet leasing provider Zeeba to buy 5,450 Canoo electric vans (with an initial binding commitment of 3,000 units by 2024) and with Kingbee for 9,300 electric vans.

For Canoo, the orders could be something of a lifeline given the unit numbers mentioned: The company is heavily indebted and, as reported, had questioned its own future this May. Most recently, there were rumours that Canoo could be a takeover candidate. The company was once founded as Evelocity to offer subscription electric cars and to market its skateboarding platform under licence to other carmakers. After Tony Aquila joined as investor and chairman, the company has refocused its strategy and is now looking to sell its vehicles – without platform licences.

In any case, the negotiating position of the financially struggling start-up is likely to be even weaker. This is evidenced by the fact that Canoo had to swallow a few bucks for the large Walmart order in July. Walmart can take over up to a quarter of Canoo in the future, and Canoo is not allowed to sell vehicles to Amazon for the duration of the deal.