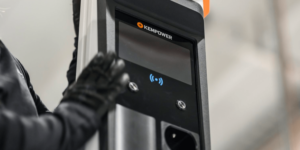 In Finland, the petroleum company Neste will build a network of high-power charging stations for electric vehicles at its petrol stations. The first two petrol stations are to be equipped with HPC stations at the turn of 2022/2023 and “dozens” more fast chargers will be installed at petrol stations throughout Finland by the end of 2024.

Neste has contracted Kempower to supply the charging hardware and its charging management system. So far, neither company has revealed more details on the number of stations and the charging capacity, but Kempower has estimated the value of the contract at more than four million euros over the next two years.

The first two filling stations that will be equipped with Kempower charging stations are located more in rural areas – one in Hankasalmi and a second station in Oulu. Although Neste has not revealed its strategy for choosing further locations, for example, whether these will be trunk roads or urban centres, there is potential for an expansive charging network, since Neste already has around 800 filling stations across the country.

Neste says it aims to open “dozens” of new fast charging stations at Neste service stations across the Nordic country by the end of 2024.  The European Union’s Alternative Fuel Infrastructure Facility under the Connecting Europe Facility Program has made 3 million euros available for the construction of its public EV charging network.

Katri Taskinen, head of sales for the Neste Finland service station network assured: “We must ensure that the coverage of high power charging stations is sufficient considering the growing number of electric vehicles, and that stations have adequate capacity for multiple cars and drivers simultaneously.”

Although Neste was founded in 1948 with the purpose to secure Finland’s oil supply, the company has redefined itself as becoming “a global leader in renewable and circular solutions. This includes the production of Sustainable Aviation Fuels (SAF) and plastic recycling among other things. The petroleum company’s EVcharging network was founded in 2004. Neste has not disclosed exactly how much it will be investing in the expansion of the charging network in addition to the 3 million euros of government funding.

This year, the provider of the charging stations, Kempower, has recently had a flurry of contracts in north and eastern Europe. This month, the company was contracted to provide 32 fast chargers for electric buses in Denmark, as well as embarking on a similarly large deal to the one in Finnland: In Estonia, Kempower will be providing fast charging stations for the petrol station network from Terminal Group.

Also this year, Kempower scored contracts in Noway, Sweden, Rumania and… Australia. In Summer this year, the company launched its a liquid-cooled fast-charging system with 400 kW continuous power for heavy-duty vehicles such as zero-emission trucks.

EasyGo to add another 200 Tritium fast chargers in Ireland

Ionity to hit UK charging network targets before due date