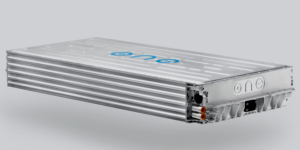 Bollinger Motors has contracted Our Next Energy (ONE) to supply battery packs for its commercial vehicle platforms. The US battery start-up’s Aries packs with LFP chemistry will be installed in Bollinger’s electric vehicles at the anticipated start of production in late 2023.

Bollinger initially plans to offer its US Class 4 commercial vehicle chassis, which will be optionally equipped with one or two battery packs. The Class 4 chassis (up to 7.257 tonnes) is to be followed by a Class 5 version (up to 8.845 tonnes) for delivery vans. These will be fitted with modular, linkable Aries battery packs from ONE.

The Aries battery is ONE’s LFP technology and not the Gemini pack familiar from other reports, with which a converted Tesla Model S drove 1,200 kilometres. The Gemini battery is said to combine the long-life Aries LFP cells with a high-energy lithium metal cell to create a dual-chemistry pack. The 240 Ah cell, which was presented in September and has an energy density of more than 1,000 Wh/l, is intended to act like a range extender, enabling particularly long ranges (or, for example, practical ranges in winter or trailer operation).

“We are pleased to provide Bollinger commercial vehicles with industry-leading range, using our Aries LFP battery platform,” said Mujeeb Ijaz, founder and CEO of ONE. “The Aries LFP chemistry contains no nickel and cobalt, offering superior durability and daily charging up to 100% without compromise.”

“ONE battery packs are ideal for our commercial trucks, giving our customers the range they need,” said Robert Bollinger, founder and CEO of Bollinger Motors. “The fact they’ll be built in the US and in Michigan is a huge advantage for us going forward.” In mid-October, ONE announced the construction of its battery factory in Van Buren Township in the US state of Michigan.

Bollinger Motors had announced earlier this year that it was putting the development of its electric pickup and electric all-terrain vehicle on hold to focus on commercial vehicles. Then in September, it was surprisingly announced that eMobility startup Mullen Automotive had acquired a majority stake in Bollinger. One of Mullen’s first moves was to revive the B1 e-terrain vehicle and its B2 pickup variant.