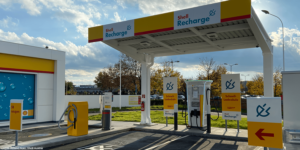 The Terra 360 fast-charging station with a maximum power of 360 kW, which was introduced by ABB last year, has now also been installed and is in use in Austria and England.

Shell commissioned one Terra 360 charging station in the Austrian Mariazeller Straße before the slip road to the highway in St. Pölten and offers commuters to Vienna the opportunity to quickly charge their electric car on the way to work. Meanwhile, in England, Gridserve has integrated a Terra 360 into its Braintree fast-charging park in Essex.

“It is fantastic to have the UK’s first 360kW capable charger open to the public at Braintree Electric Forecourt,” said Gridserve CEO Toddington Harper, adding: “By installing this latest innovation now, we are offering state-of-the-art charging technology to our customers. It can be used with a variety of electric vehicles including HGVs and cars towing caravans.”

As the name suggests, the Terra 360 charging station is capable of a maximum charging capacity of 360 kW and can charge up to four vehicles at once. At the time of the initial announcement, the Terra 360 was to be available in Europe from the end of 2021, while the USA, Latin America and Asia Pacific are to follow in 2022. As 2022 is nearing its end, the charging stations have not gone beyond the continent, however the upcoming factory in the USA should help with that.

The first Terra 360 charging station was installed by ABB in Norway in May, in the Oasen shopping centre in Bergen and in the Norwegian ski resort of Geilo. ABB has steadily been expanding its international market footprint in the last few months, with the announcement of a new factory in the USA as well as one in Italy. In India, ABB took over a controlling stake in a digital charging platform, with the intention of taking over the company completely in 2026. In Germany, ABB and Shell are planning to build a nationwide network of more than 200 Terra 360s.

GM teams up with SDG&E on Vehicle-to-X operations