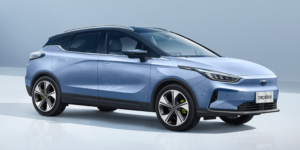 The Chinese car company Geely is bringing the Geometry C to market in Eastern Europe. While the compact electric car will continue to be sold in China under the Geometry brand, it will apparently be marketed in Europe as the Geely Geometry C directly under the name of the parent company.

This is reported by the French portal Automobil Propre without naming any sources. If the Geometry C does indeed come to Europe next year under these conditions, this would mean the first market entry of the Geely core brand in Europe. With brands like Volvo, Polestar, Lotus, LEVC and Lynk & Co, the division-rich Chinese OEM is already on the scene. For Zeekr, the European market entry has been announced for next year.

The Geometry C, which has already been on offer in China for more than two years, is to be sold specifically in Hungary, the Czech Republic and Slovakia from the first half of 2023. The background is a cooperation between Geely and the Hungarian car importer Grand Automotive Central Europe, which was agreed earlier this month. Other Geometry models could follow, according to media reports.

Xue Tao, executive deputy general manager of Geely International, said the following at the signing of the cooperation agreement: “This is the first time the Geely brand enters the European Union market and represents a significant step forward for Geely’s globalization ambition.”

In the course of the ‘Smart Geely 2025‘ strategic plan, at least five new Geometry models were announced last year from 2022 onwards, to be based on all-electric platforms and the SEA architecture. Only recently, parent company Geely also announced its intention to further accelerate the transition to electric cars. There is now talk of every second vehicle sold by the Group being an electric car by 2023.

Incidentally, Geely already outlined its export plans last year in the course of the ‘Smart Geely 2025’ roadmap as follows: The Geely Auto brand should focus on the markets in Eastern Europe, the Middle East, Southeast Asia and South America. And Lynk & Co should gain a foothold in Russia, Malaysia, Australia and New Zealand, among others. In its overview at the time, the manufacturer only mentioned Western Europe in the form of the EU as a target market for “new energy products”.