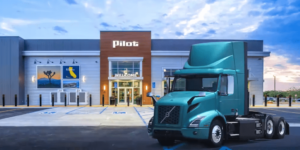 In the USA, Volvo Group and the Pilot Company, the largest operator of truck stops in North America, have signed a memorandum of understanding to establish a public charging network for electric trucks. Pilot Company plans to install HPCs at an unspecified number of locations that will be open to heavy-duty vehicles of all brands.

Volvo will assist Pilot in prioritising the locations that will receive charging infrastructure, partly through sharing data on current and expected order volumes for battery-electric trucks, as well as customers’ charging requirements and patterns. Volvo will also take on the task of advising the Pilot Company on the availability of federal and state funding. Of Volvo’s electric truck models, the VNR Electric is likely to be much more relevant for long-distance transport and charging at truck stops.

Pilot Company is a petroleum company based in Knoxville, Tennessee. The subsidiary Pilot Flying J operates a number of truck stops in the USA and Canada and refers to its own service areas as “travel centres”. Pilot Company is already expanding with a fast charging network at its car stations in the US in collaboration with General Motors.

So far, neither company has revealed how much charging power the HPCs at Pilot Company truck stops will have, how many charging points are planned per location and how dense the network along the trunk roads will be. Presumably, this will be developed in the course of Volvo assisting Pilot in prioritising the locations to receive charging infrastructure.

Volvo Group North America makes it clear that the truck charging network is meant to support sales of its own VNR Electric model. Until now, the model with a range of 275 miles (442 kilometres) has been used primarily in distribution transport, where it is charged at depots.

“Our VNR Electric customers, as well as other fleets looking to adopt battery-electric trucks, will have peace of mind that they can access a reliable and robust, publicly accessible charging network strategically located along major transportation corridors, enabling them to extend their operating radius and decarbonize even more of their routes,” said Peter Voorhoeve, president of Volvo Trucks North America.

The truck charging network’s HPC posts won’t be the first fast chargers at truck stops. In July this year, Volvo Trucks North America began working with partners in California to build a publicly accessible charging corridor for medium- and heavy-duty trucks. Construction is to begin this year and be completed by the end of 2023.