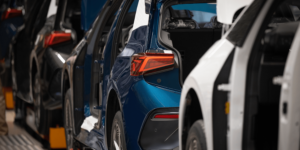 Volkswagen’s electric car plant in Zwickau set a production record in the week from 7 to 11 November when 7,100 electric cars were produced, more than in any previous week. This means that the plant is close to reaching its maximum capacity.

On average, more than 1,400 electric cars were built daily during the record week. The Audi Q4 e-tron and its Sportback offshoot and the Cupra Born are built in Zwickau alongside the VW ID.3, ID.4 and ID.5.

“This is a very good achievement of the entire team and a unique record because, before the transformation, such high numbers were not even technically possible,” says Robert Janssen, Managing Director of Technology and Logistics at Volkswagen Saxony, about the stage victory. “The continuous work on our processes is paying off.”

VW brand manager Thomas Schäfer also thanks the Zwickau team. “This is also a real challenge due to the current supply bottlenecks,” says Schäfer, who was already involved in the production start-up of the Enyaq in Mlada Boleslav as Skoda boss. “My thanks therefore go to my colleagues, who are impressively demonstrating how we are continuing to drive forward the transformation at Volkswagen with speed and high quality.”

“What we need are parts, parts, parts,” explains Jens Rothe, Chairman of the General Works Council of Volkswagen Saxony. “The production record shows: If the supply situation allows it, the workforce can deliver. The demand for our products is unbroken and we want to continue to drive forward the Group’s electric targets.”

Since the market launch of the ID.3 in September 2020, 500,000 models of the ID. family have been delivered to date. Around two-thirds of these come from Zwickau production. Other MEB locations in Europe now include Mlada Boleslav (Skoda Enyaq and Enyaq Coupé) in the Czech Republic, along with Emden (ID.4) and Hanover in Germany with the ID. Buzz.