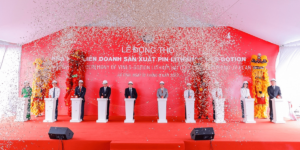 In Vietnam, construction has begun on the country’s first production facility for LFP battery cells. This is being built as part of a joint venture between VinES Energy Solutions, a subsidiary of the Vietnamese conglomerate Vingroup, and the Chinese battery manufacturer Gotion High-Tech.

The factory in the Vietnamese province of Ha Tinh will be designed for a capacity of five GWh per year and is scheduled to start production in the third quarter of 2024. The LFP battery cells produced there will be used in VinFast e-vehicles and VinES stationary energy storage systems.

The battery cells for VinFast’s vehicles can be processed directly on site: In December 2021, VinES had also started building a factory in Ha Tinh for battery packs to be used in VinFast’s electric cars and buses, which is now nearing completion and is expected to start operations in December, according to the latest announcement. Until the cells come from the company’s own production, purchased cells will be processed into battery packs here.

In the announcement, VinES speaks of a “high level of automation and a cutting-edge, optimized production process”. This is to meet the requirements of the EV batteries, but also those of the stationary storage units that VinES wants to bring to market. Details on the processes or the

For the expansion stage with the five GWh production capacity, the two partners are investing the equivalent of around 268 million euros. However, VinES and Gotion already announce that they will “research and expand the project according to the market’s development opportunities and potential”. When exactly this review is to take place and what production capacity would be possible in a later expansion building is not stated, however.

Pham Thuy Linh, CEO of VinES, said at the groundbreaking ceremony that the factory is “an essential component in creating battery supply autonomy for VinFast EVs and VinES’s development goal to become the preeminent energy solutions company”.