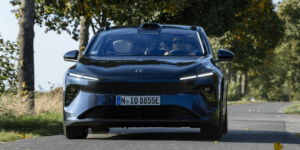 Nio now offers rental as well as purchase options for its electric models in Europe. This applies with immediate effect to the Nio models ET5, ET7 and EL7 in Germany, the Netherlands, Denmark and Sweden. The purchase prices for the ET5 in Germany start at 49,900 euros – but without the battery.

For the premiere model, the ET7 electric sedan, prices start at 69,900 euros. The Nio EL7, for the time being the only electric SUV in the range, costs at least 73,900 euros. However, the battery is not yet included in these prices – it can be either rented or purchased.

As Nio confirms in the announcement, the vehicles with an option to purchase are to be delivered from the beginning of 2023. Compared to other delivery times for new electric cars, this is comparatively short, but the timeframe is not specified.

At the European premiere in Berlin at the beginning of October, Nio had announced that it would only sell its vehicles in Europe by subscription. Since many potential customers subsequently indicated that they would prefer to buy the vehicle, Nio says it has reacted to this feedback and subsequently introduced the purchase option.