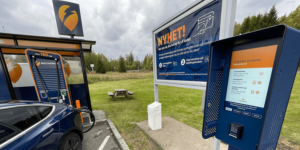 In the Nordics, Recharge will be the first major operator to integrate card payment terminals at its charging stations. The launch will take place in Norway in 2023. The Norwegian parliament is also currently debating the introduction of corresponding legislation with this stipulation.

Recharge says it operates the largest charging network in the Nordics, with more than 2,500 charging points in Norway and another 1,500 in Sweden and Finland. The company, which is owned by British infrastructure investor Infracapital, will initially install new charging stations in Norway with card terminals. The terminals will be introduced into the existing charging network as soon as the older charging stations are replaced or upgraded.

“Card payment at charging stations is actually more technically challenging than many people think, but we have been testing various brand new systems with success for some time now. We’re very pleased that the pilot phase has shown that we will be able to roll out card payment terminals at charging stations starting next year,” says Stian Mathisen, Head of PR and Regulatory Affairs at Recharge.

In Norway, with the world’s highest per-capita uptake of electric cars, charging modalities is a widely discussed topic in the country. According to the Norwegian Electric Car Association, most of its 120,000 members want card payments at charging stations. The Socialist Left Party also recently submitted a demand to the Norwegian parliament that all charging stations be equipped with card payment terminals in 2023. The parliament decided to first hold a public hearing on the issue. In Germany, the government has stipulated that card terminals must be present for all charging stations that go into operation on or after 1 July 2023.