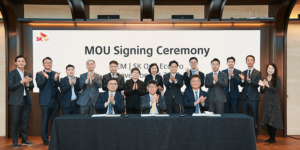 The South Korean battery cell manufacturer SK On is building a nickel supply chain in Indonesia together with two partners. Through a joint venture, the partners want to secure raw materials there and process them into intermediate products. In the end, however, the material could end up in SK On’s US-American battery plants.

To this end, SK On wants to set up a joint venture with the South Korean battery materials manufacturer EcoPro and Green Eco Manufacture (GEM), a Chinese manufacturer of battery precursors, for the production of nickel intermediates in Indonesia. The joint venture, which has yet to be named, will build a production plant for the nickel intermediate MHP in Sulawesi, according to the SK On announcement. This is to produce MHP for 30,000 tonnes of pure nickel per year from the third quarter of 2024. This is enough for electric car batteries with a total capacity of 43 GWh or for 600,000 cars.

The three companies also plan to secure nickel oxide from the Hengjaya mine in Sulawesi as part of their joint venture. “Since nickel oxide can be mined in the open air, the mining process is cheaper and cobalt can be recovered as a by-product,” SK On wrote.

To produce the MHP from the nickel oxide minerals, the three partners plan to introduce the high-pressure acid leaching (HPAL) process. This involves leaching metal that reacts with sulphuric acid from raw nickel ore under high temperatures and high pressure. This technique produces high-purity nickel compounds. According to the statement, GEM has initial experience in this field and will contribute it to the project.

Currently, 24 per cent of the world’s nickel sulphate is produced from MHP. According to the Korea International Trade Association, this figure will rise to 42 per cent by 2030. The three partners also want to contribute to this, as they are also considering the production of nickel sulphate and battery precursors in South Korea – from MHP produced in Indonesia.

If SK On procures the nickel sulphate from South Korea, a free trade partner of the US, and uses it in the production of electric car batteries in the US, the company can meet US subsidy requirements for electric vehicles.

SK On already operates two battery factories in the US state of Georgia and supplies Volkswagen (for US production of the ID.4) and Ford for the F-150 Lightning, among others. There were also reports this week that Hyundai is planning several battery factories around its electric car plant under construction in Georgia with partners – including SK On.

Customcells is on the search for two new battery plant locations

Keliber to mine and refine lithium in Finland