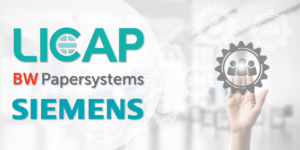 Siemens, LiCAP Technologies and BW Papersystems are cooperating in the field of dry electrode manufacturing systems. The trio has now entered into a strategic partnership for the production and marketing of such systems for the battery cell industry.

With their cooperation, the three companies want to improve the future competitiveness of North American and European gigafactories. The core of the project is the industrialisation of LiCAP’s “Activated Dry Electrode” technology. Siemens is expected to play a major role in scaling production for both companies. BW Papersystems, a division of US equipment manufacturer Barry-Wehmiller, is to support the project by transferring its experience from the paperboard, paper, film and packaging industries to the dry electrode sector.

According to Martin Zea, Vice President of Operations at LiCAP, it is important for his company that BW Papersystems and Siemens already have the expertise and know-how in areas that are critical to the successful commercialisation of the “Activated Dry Electrode” technology. “This is why we partnered up with them and have no doubt they can build manufacturing equipment for our electrode manufacturing process at much greater speed compared to any other company.”

Currently, a number of companies and research institutions around the world are working on dry-coating processes for electrodes. As the central component of the battery, these usually consist of a metal foil covered with a thin coating. The coating contains the active components that are responsible for storing energy. Usually, the coating process is carried out wet-chemically with so-called slurry preparations: A kind of paste is produced from active material, conductive carbon blacks and binders together with a solvent, which is first used to create a wet layer on the metal foil. In order for the solvent to evaporate again afterwards, huge plants with very long drying distances are needed. These steps would make dry coating superfluous.