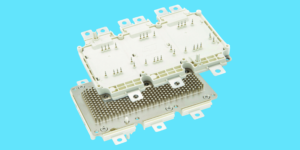 Semiconductor company STMicroelectronics has introduced new silicon carbide (SiC) power modules. With five new module variants, OEMs are to be offered flexible options. The Hyundai Motor Group is the first customer on board. The Koreans use SiC technology in the Kia EV6, among others.

The five power modules are based on the so-called SiC MOSFET technology and are already in production, according to the company. They support a range of operating voltages and are available with different power ratings. The components are installed in a housing that should be easy to integrate into electric drives. STMicroelectronics markets the new product series under the name “Acepack Drive”.

According to the manufacturer, the semiconductors used are third-generation SiC MOSFETs (“Gen3”). They are intended to provide “the highest power density and energy efficiency”, as Marco Monti, President Automotive and Discrete Group of STMicroelectronics, says. “ST’s silicon carbide solutions will enable major car manufacturers to set the pace of electrification in the development of future generations of electric vehicles.”

The Dutch company, which has headquarters in Switzerland, cites Hyundai Motor Group as a customer. Accordingly, the Koreans have decided to integrate the new power modules from STMicroelectronics in their current electric vehicle platform E-GMP. The Kia EV6, among others, is based on this platform and is explicitly named in the accompanying press release as a model that will have the new modules on board.

STMicroelectronics claims to have already supplied SiC components for more than three million mass-produced passenger cars worldwide. The company plans to expand its manufacturing capacity with a recently announced SiC substrate production facility in Catania, Italy. The plant is scheduled to open in 2023.

Incidentally, STMicroelectronics also acts as a partner to Renault. The two sides have been linked by a strategic cooperation since 2021. The aim of the cooperation is to further expand the performance of Renault Group’s electric and hybrid vehicles based on STMicroelectronics’ wide bandgap semiconductor technologies. The chip manufacturer is pushing the launch of components based on innovative materials such as gallium nitride or silicon carbide under the slogan Wide Badgap.

Abt signs cooperation with Cupra for Formula E

BMW iX review: How efficient is the BMW eSUV in real life?