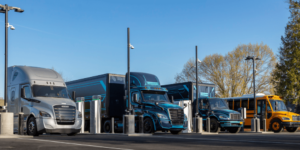 The California Energy Commission (CEC) has approved a 2.9 billion US dollar investment plan, primarily to expand infrastructure for zero-emission vehicles (ZEV) in the state. The majority of the budget is to flow into charging points for electric utility vehicles.

Of the total equivalent of 2.73 billion euros, the largest portion – $1.7 billion (1.6 billion euros) – is to be invested in new charging facilities for medium and heavy-duty electric vehicles by 2026.

The second most generously endowed investments amount to 900 million dollars (848 million euros), which is earmarked for new chargers for electric passenger cars and light commercial vehicles. The new programme is expected to create 90,000 new electric vehicle chargers in California, more than doubling the 80,000 chargers currently installed. Combined with investments from utilities and other programmes, the US state aims to reach its goal of a total of 250,000 chargers by 2025.

The investment plan also includes $90 million (85 million euros) for hydrogen refuelling stations. California has already taken many steps on the path to a hydrogen economy. This complemented by a larger federal hydrogen strategy with a focus on hydrogen freight transport across the country terminating from the country’s ports. Also relevant for Californian ports is the $97 million that is earmarked for “emerging opportunities” under which the CEC includes aviation, locomotive, marine vessels and vehicle-grid (V2G) integration.

The Port of Los Angeles is already well underway with decarbonising activities, while the state’s airports have been the focus of hydrogen hubs as well as the decarbonisation of ground transport. In terms of the V2G side of things, the state has had some trouble with black outs and understandably concerned with grid security, especially in light of the expected uptake of electric vehicle charging. Apart from this government funding, V2G pilot attempts are already underway between vehicle manufacturers and utility companies.

The budget also includes smaller items, such as $15 million for the “production and delivery of zero and near-zero carbon fuel” (i.e. e-fuels) and another $15 million for “low carbon fuels”, while $10 is to be invested in workforce development.

In January 2022, California increased its budget for electric mobility investments to a total of ten billion US dollars. In August, the California Air Resources Board (CARB) passed the regulation ‘Advanced Clean Cars II’, which defines the path for the ban on internal combustion engine (ICE) cars in the US state from 2035 onwards. In November 2022, as part of this scheme, the California Air Resources Board (CARB) approved a US$2.6 billion investment plan for electric vehicle purchase incentives and mobility services. Earlier the same month, the California Public Utilities Commission (CPUC) adopted a five-year, statewide, $1 billion transportation electrification program.

“This transformative investment will deploy charging and refueling infrastructure swiftly and equitably to make sure drivers of zero-emission cars and trucks feel confident they can refuel wherever they go,” said CEC’s Lead Commissioner for Transportation Patty Monahan. “The plan will increase access to charging and hydrogen fuelling for individuals, businesses and public agencies, while supporting our emerging manufacturing ecosystem and creating jobs. Most importantly, it provides critical funding to support the move away from dirty trucks and buses that have burdened our most vulnerable communities for too long.”