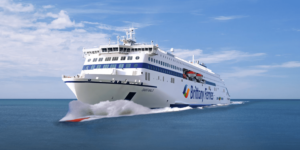 Leclanché says it has been selected as the battery provider for two hybrid vessels built for Stena Line and Brittany Ferries. The ‘E-Flexer’ ferries will be the world’s largest hybrid vessels and run between England and France with deliveries to progress fast.

Leclanché is expected to deliver its battery system in 2024 and 2025, and each battery system has a capacity of 11.3 MWh and a max current of 940 Volt, so the manufacturer. This appears to go even beyond initial data the Swiss company had released when first presenting its latest-gen battery system Navius MRS-3TM in June 2022 as reported.

It builds on previous generations, and Leclanché added that the new system improves battery energy density, modularity and safety. The MRS-3 also features liquid cooling, which enables a more compact design with up to 50 per cent higher energy density. The MRS3 racks are available in seven different heights. The modules are protected against water ingress and include battery management according to the master-slave principle for increased fail-safety and liquid cooling.

As for the new project with Stena Line, space won’t be the biggest issue. The E-Flexer ferries measure 195 metres and have been designed by Stena RoRo (a Stena Line affiliate) in collaboration with Brittany Ferries for cars to roll on and off. They will be chartered on a 10-year lease to Brittany Ferries for operation between Portsmouth, United Kingdom, and the French ports of Saint-Malo and Caen.

“Stena is a leader in the development of technologically advanced vessels and an early participant in the green shipping transition,” said Staffan Stenfelt, General Manager of Newbuilding at Stena RoRo. “We’re excited to partner with Leclanché in this major milestone in hybridisation technology and demonstrate the importance of flexibility in building next-generation vessels that can adapt to the latest technology developments.”

Stena Line is also working on electric shipping projects in Scandinavia with partners such as Volvo Group and Scania.

Phil Broad, CEO of Leclanché E-Mobility, said: “We are delighted to join in the efforts of both Stena RoRo and Brittany Ferries in favour of the decarbonisation of maritime transport.” He added that differentiated cell technology and liquid-cooled system were key factors in the company’s nomination. “Another main competitive asset, the system design provides a distinct size and weight advantage versus our competitors and is especially cost-effective for large-scale systems such as those being manufactured for Brittany Ferries.”

Leclanché has already been selected for several other large-scale projects, including providing 10 MWh of capacity for Scandlines’ PR24 hybrid cargo ferry. At the time of the order, it was the world’s largest hybrid ferry, as well as the Yara Birkeland, the world’s first autonomous and fully electric container ship, in which Leclanché batteries are involved.

Leclanché is one of the only battery system suppliers to manufacture its lithium-ion battery cells, packs, modules and casings to rigorous German and Swiss standards in its automated manufacturing assembly lines in Willstätt, Germany and Yverdon, Switzerland.