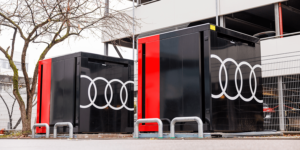 Audi is creating 72 additional charging points for electric vehicles at its Neckarsulm site through the use of so-called cubes, which use used lithium-ion batteries from dismantled Audi test vehicles to store electricity.

Two of the cubes feed a total of 48 charging points and expand the charging capacity for employees and visitors to the Neckarsulm site in multi-storey car park 1 to the south-east of the Audi plant. One Cube with a further 24 charging points is located in the car park at the north-eastern boundary of the plant. In each of the three cubes, 198 used battery modules with twelve cells each act as energy storage. According to Audi, the capacity can be expanded: there is room for 132 more modules in each of the cubes.

By supplying power to the charging points from the second-life batteries, Audi says it can dispense with the “complex installation of a cost-intensive infrastructure with medium-voltage supply lines and transformers”. All three cubes together have an energy content of 1.58 MWh, i.e. just over 500 kWh per container cube. These are each charged overnight with a 70 kW supply line at a low grid load, and during the day they deliver their electricity to the 11 kW charging points.

“Thanks to the batteries in the cubes, we gain 300 kW of charging power for the wallboxes from the relatively low connected load of 70 kW,” explains Jannik Mastall, project manager for the expansion of the charging infrastructure at the site. Audi describes the functional meadow as follows: “The system works like a rain barrel. The incoming connected load is constantly fed into the energy storage units. In the future, photovoltaic modules could provide additional green energy for the Cubes.”

In the multi-storey car park at the Audi Forum Neckarsulm, 40 charging points have already been in operation for around two years; these are fed from the grid via a transformer station. In addition to the new Cubes, Audi has put another 150 charging points into operation in multi-storey car park 2 on the eastern boundary of the plant – also fed by a transformer station. According to Audi, there are a total of around 600 charging points at the plant boundaries in Neckarsulm and Heilbronn, of which around 20 are fast chargers.

“With our charging points, we are making our site fit for the electrification of our models and also giving employees the opportunity to charge their e-cars during working hours,” says Alexander Jakob, Head of Plant Structure Planning Neckarsulm. Some of the charging points are also open to the public.

Audi already has experience with battery-supported charging points, albeit in the HPC sector: the in-house Audi Charging Hubs also use buffer batteries from test vehicles.