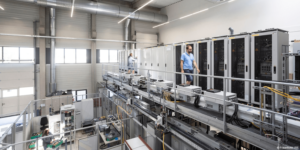 Increasingly higher currents during fast charging pose new challenges for both the power electronics and the contact system. As part of the joint project ‘HV-MELA-BAT’ funded by the German government, Fraunhofer researchers now want to find a remedy.

The background to the project is not only the further development of existing fast-charging infrastructure based on the CCS standard, but also the future Megawatt Charging System (MCS) for battery-powered heavy-duty traffic. For a long time, the 500 amps previously defined as the upper limit in CCS were hardly reached by any model, or if so, then only maintained for a short period of time. In current premium vehicles with batteries of over 100 kWh or even e-trucks with five or six times the energy content, high currents are maintained for much longer. The upcoming MCS, with up to 3,000 amps, sets the requirements even higher.

The project ‘HV-MELA-BAT’ is coordinated by the Fraunhofer ISE and aims to develop the necessary power electronic converters as well as a contact system for high currents and voltages. Full charging power even at power-limited grid connection points is to be provided by a buffer storage unit, which is to be built and evaluated together with an MCS system at the Centre for Power Electronics and Sustainable Grids at Fraunhofer ISE.

The buffer storage is to consist of second-life batteries from the automotive industry, specifically probably from project partner Mercedes-Benz Energy. With such a storage system, future megawatt charging stations should also be able to be used with significantly lower grid connection power.

According to the press release, the aim is to make the system capable of addressing “the widest possible range of charging voltages and vehicles, thus ensuring downward compatibility. Conceptually, the interconnection of up to four charging points of 250 kW each and the integration of regenerative sources and sinks are also to be investigated within the system”.

The key point is the charging voltage of 1,250 volts: the maximum defined in the MCS. A higher charging voltage enables high charging power even at moderate charging currents. “However, increasing the charging voltage requires the use of new efficient circuit topologies as well as appropriate semiconductor switches,” says Fraunhofer ISE. “The central power electronic converter, which provides galvanic isolation between the grid and the vehicle battery, is being developed and built by Fraunhofer ISE. It is to be both highly efficient and highly compact.” The researchers intend to use silicon carbide semiconductors for this.