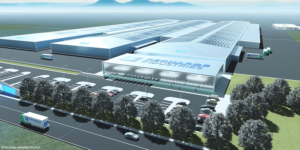 Recharge Industries plans to manufacture batteries for electric vehicles and stationary energy storage at the cell factory in Geelong in the Australian state of Victoria. Construction will begin in the second half of 2023, according to Recharge Industries and Accenture.

The company’s stated goal is to produce battery cells with a volume of two GWh in the second half of 2024 and six GWh per year from 2026. The production equipment for the first 2 GWh production line has already been secured with binding purchase agreements and financing. The equipment is scheduled to arrive in Australia by the end of May 2023. Recharge is relying on the development of its technology partner Charge CCCV or C4V for short.

When the planned 30 GWh are to be reached is not clear from the communications from Recharge Industries and Accenture. What is clear, however, is that when fully operational, the plant is expected to directly employ 1,500 to 2,000 people.

One possible reason for the ambiguity in the long-term statements: only with the agreement concluded with Accenture in January are both companies now entering the “detailed engineering phase”, which is to lay the foundation for the construction of the plant. Due to the planned start of production in 2024, Recharge already had to create some facts when ordering the first machines and equipment. In the engineering phase, Accenture is to advise on plant layout, utility planning and production line set-up, among other things.

Subsequently, Accenture will also assist in the procurement and shipment of additional equipment, conduct final testing on the then-set-up facility, and later provide “ongoing process and product engineering support to improve battery production.”

“Establishing a sovereign manufacturing capability to produce state-of-the-art lithium-ion battery cells is critical to Australia’s renewable energy economy – meeting national demand, generating export income and securing supply chains,” says Recharge Industries CEO Rob Fitzpatrick. “Our factory, which we are building with the assistance of Accenture’s engineering and capital projects expertise and underpinned by C4V’s IP and battery technology, will create thousands of jobs and attract large-scale investment from key players in Australia, the Indo-Pacific region, and other parts of the world.”

SK On closes deal with Urbix for anode development