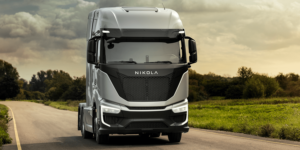 GP Joule plans to procure 100 Nikola Tre trucks powered by hydrogen fuel cells. This is provided for in a letter of intent signed by both companies. The first vehicles could go to GP Joule in 2024 – provided the German government approves the corresponding funding.

The Nikola Tre FCEVs in the European 6×2 variant will roll off the production line at the Ulm plant of the joint venture between Nikola and the Iveco Group. The first 30 Nikola Tre FCEVs are expected to be delivered to GP Joule in 2024, provided the MoU leads to a binding order. The remaining 70 vehicles are to follow in 2025. GP Joule says it intends to make the 100 H2 trucks available to its transport and logistics customers – but specific customers are not yet named in the announcement.

The order is subject to a successful application for funding from the German government under the KsNI funding directive. The vehicles will be financed through the so-called “GATE” business model (for “Green & Advanced Transport Ecosystem”), an all-inclusive rental model for electric trucks from Iveco.

In addition, the memorandum of understanding agreed that GP Joule will market more hydrogen fuel cell-powered tractor units to customers in Europe from 2026 “and supply them with 100 per cent green hydrogen at its refuelling stations”.

For Nikola, it is the first major order for the fuel cell variant of the Tre from Germany – so far, a few examples of the BEV variant are in operation at the Port of Hamburg. So far, most letters of intent or orders have been placed with Nikola by US companies.

“The order from GP JOULE will be an example of how the Nikola Tre FCEV can further support commercial customers in Germany in their transition towards zero-emissions several years ahead of other OEMs, which helps to achieve the goal of decarbonizing the transportation sector,” says Nikola CEO Michael Lohscheller.

“100% renewable energy for all, this is what drives us,” says André Steinau, CEO of GP Joule Hydrogen. “Together with Nikola and IVECO, we offer our customers all the components for climate-neutral heavy-duty transport from a single source: from the production and purchase of green hydrogen to the hydrogen filling stations to the fuel cell trucks and service that meet their needs. This is the easy entry into emission-free freight transport.”

Last year, GP Joule had already signed a framework agreement with Clean Logistics for the delivery of 5,000 hydrogen-electric 40-tonne trucks As was announced shortly before Christmas, however, Clean Logistics is in financial difficulties for its part.