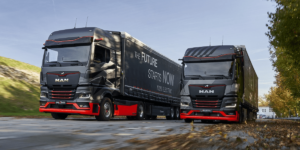 The logistics service provider DB Schenker plans to procure a total of 100 heavy-duty e-trucks from MAN by 2026. The first MAN eTruck vehicles are to be handed over in the first half of 2024. This is provided for in an agreement freshly signed by DB Schenker and MAN Truck & Bus.

The first examples for DB Schenker are to be volume semitrailer tractors, “so-called ultra semitrailer tractors”, MAN informs. The vehicles will have a semitrailer height of around 950 mm, which should allow the transport of volume trailers with an internal height of three metres. According to the partners, the ten MAN eTrucks that DB Schenker will receive in 2024 will be ultra-tractor units. The other units, which will be delivered in 2025 and 2026 according to the agreement, will be a mix of ultra-tractor units and swap body trucks.

MAN is aiming to launch heavy-duty electric truck production in early 2024. “In the first half of 2024, the first MAN eTrucks will be produced in a small series on the production line at the headquarters in Munich,” a recent company statement said. DB Schenker is the first pilot customer for these electric trucks with the signing of the current agreement.

DB Schenker is often among the first to order, buy or lease other new trucks. This applies, for example, to the Mercedes eActros, the Volta Zero from Volta Trucks, H2 trucks from lessor Hylane or eTrailers from Trailer Dynamics – and this list is far from complete. With the MAN eTruck, DB Schenker wants to “gather practical experience as early as possible”. In addition to the vehicles, the logistics specialist says it is using digital services from MAN Digital Solutions and accompanying advice from MAN Transport Solutions (including route analysis, charging strategy, charging infrastructure planning and energy demand optimisation).

Hardly any technical data is yet known about MAN’s eTruck. At the IAA Transportation in Hanover, the Traton subsidiary exhibited a production-ready prototype of the model in September 2022. The MAN eTruck is designed for heavy long-distance transport. The manufacturer specifies a daily range of 600 to 800 kilometres, and at a later date it should even be possible to reach 1,000 kilometres. That sounds like more than the 500 kilometres of the Mercedes eActros Longhaul, for example, but it is just a trick: MAN includes charging stops via MCS in the daily range. Daimler Truck, on the other hand, states the range with one battery charge.

MAN has been preparing the production of the eTruck at the MAN eMobility Center since 2021. The aim is to have conventional diesel trucks and electric trucks running off the same production line there during the ramp-up of electromobility. According to the manufacturer, elementary components of the eTruck will be produced in Nuremberg in the future. MAN assembles the high-voltage batteries at the site – “currently still in small series production, but from the beginning of 2025 the battery packs will be produced in large series,” according to the company’s headquarters. To this end, the company plans to invest around 100 million euros over the next five years at the tradition-steeped production site for combustion engines. The commercial vehicle manufacturer is receiving support from the Bavarian state government, which has promised a subsidy of around 30 million euros for the period 2023 to 2027.

“DB Schenker and MAN are pacing the path to an electric future together. We are very pleased to have our first customer for the new eTruck,” comments Alexander Vlaskamp, CEO of MAN Truck & Bus, on the first acceptance agreement. The demand in the market for this fully electric vehicle is already enormous, he said. “. The topic is now really picking up speed, also because more and more of our customers are setting themselves extremely ambitious decarbonisation targets. This has a direct impact on the logistics chains. However, we will only be able to achieve a sustainable mobility turnaround in heavy goods transport with the appropriate political support. This concerns, among other things, the rapid development of the charging infrastructure and also the further design of the funding framework for the acquisition of electric trucks.”